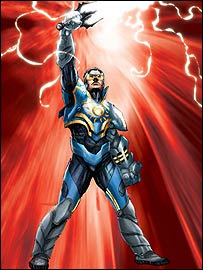 Sachin Tendulkar is the most hyped cricketer off all time (before you kill me, I'm just stating fact. Notice : hyped. not overhyped. There's a difference.) His face peers out at us from advertisements, merchandise, endless reams of newsprint. We love him, and even tolerate the bad ads.

But this is not cool. That armour is a fashion disaster. And, God save us, a crackling, glowing, flaming cricket bat ? If I wanted extra cheese, I'd order pizza, thanks you very much.

This kind of thing is an insult to comics. And comics fans. And creators. This is a typically stupid, corporate 'let's cash in, quality be damned' idea. This will flop. The series will not complete the first run. If there is a comics God.

Here's a gem from the guys who're doing this :

According to Suresh Seetharaman, President, Virgin Comics and Virgin Animation, “Virgin has always worked with people who are prominent, and most importantly, who have set goals for themselves in life and achieved them too. Sachin Tendulkar is well recognised as an achiever globally, and it works best to have him as the hero for our comic, gaming and animation series.”

If there's any sense tucked away into that mind-numbingly inane statement, somebody please point it out to me. What are these guys thinking? ARE they thinking?

From the free comic downloads available from Virgin's web site, I find that all their titles are conceptually interesting and visually appealing, but are bogged down by immature (and sometimes plain bad) writing and editing, and a derivative, wannabe Marvel / DC feel. This one seems doomed at the concept level itself.

A cursory glance at comics history will show you that moronic get-rich-quick comics based on celebrities are always abominable products that are rarely recalled fondly, and usually don't sell well. Even the legendary Stan Lee made a mess of his ill-fated Backstreet Boys project. Remember Amitabh as Supremo ? Remember Gavaskar as Sunny ? Titles that are remembered today only for being putrid and grotesque. A similar fate surely awaits 'Master Blaster'. (Any chances that I could be wrong, and this could actually be good? Nah. Three words - flaming. cricket. bat. They're already too far down crap road.)

This is a crass cheapening of one of our few real-life heroes. I hope that true fans of Sachin Tendulkar will see it for what it is.
Posted by Anand Ramachandran's Evil Twin at 10:10 AM