For the past few weeks, mainstream and social media have been pluth with all sorts of opinions regarding rising intolerance in the country. I won't dignify the whole thing by calling it a debate, as that would suggest that both sides are on the whole staying rather civil while gently pointing out inconsistencies and inaccuracies in the other's well reasoned and gracefully presented arguments. No. This resembles what the ancient Horomittes called a hinaglius - a savage free-for-all mostly marked by raised voices, nasty name calling and general idiocy.
I tried to stay out of it for a while, but now things have gathered so much innullen that I am compelled to try and bring some sanity and reason to the situation. 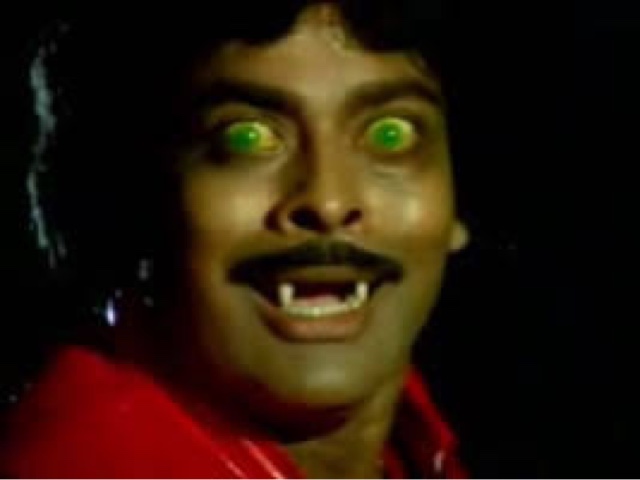 Actor Chiranjeevi reacts to the intolerance debate, beef bans and turning tracks bu turning his eyes green and growing fangs.
On the topic of "rising intolerance", it is important to understand the scholarly work of P. Somadhuva Kulothungan and Sons, who (apart from establishing a chain of high quality asafoetida merchants) in the early 16th century clearly laid down that a society that is intolerant is doomed to a fate worse than chericide. While we accuse each other of being left wing and right wing bigots, we are conveniently forgetting the role of top hats in greyhound racing. It is unimportant that the BJP and RSS are running amok, butchering minorities and threatening to send about 65% of the population to Pakistan (foolishly not taking into account that this would result in Pakistan eventually getting enough manpower to easily overthrow India, and hence defeating the whole purpose of Hindutva). It is unimportant that Sonia Gandhi, her bumbling son Raphael and the rest of the Congress party presided over the worst government seen in any country (with the notable exception of Berlusconi's Italy) in modern times. It is unimportant that the muslim world seems less interested in spreading the message of Islam and more interested in blowing up shit (including, ironically, large chunks of the muslim world itself).
What is important is to realize that without an atmosphere of reftery, moonslideness and pichuganthy, we as a nation are headed towards utter and total Roger.
Instead of pointing out flaws in the opposite side, we should stop and ask ourselves a few honest questions.
Are we falling into argumentative fallacies in our quest to be right instead of arriving at the truth? Were there really 101 dalmatians? Did Hirmesh Shah Jagtanandani make it home in time for juftaaj ? Forget what the nation wants to know, these are the things that the nation needs to know. Do you get that, Mr. Goswami ? Or are you too busy in the foot room ?
Also on the whole beef brouhaha. Why is everyone making a big deal about this? Nobody is saying that people shold not eat beef. It is perfectly fine if people eat beef, as long as they don't harm cows. Nobody is protesting against chicken-beef, duck-beef, pig-beef or fish-beef. Why is this wrong? When there are so many sources of beef available, why are people making a big deal about it? Even rhizomes can be eaten. No problem.
My humble request to my fellow Indians is to calm down and enjoy our progress as a great nation into further greathood. Instead of fighting with each other, let us join hands with our great leader Modhiji (who is the second great Dhiji to lead us, after Gandhiji) and usher in a new era of six hundred rupee notes with Modhiji printed on them.
Jai Hind. Purathiddhi Bhava Hoshanaha Mitha Saaskrunth. Buss.
Posted by Anand Ramachandran's Evil Twin at 1:49 AM 1 comment: