Spore : Evolution of the Peeblosaur

Spore is incredible so far. I'm only at the creature stage, but my creature has evolved from a helpless, single-cell organism into a strong predator which hunts its prey by shooting poison at them. From its tits!!

Some pictures, to demonstrate the evolutionary path : 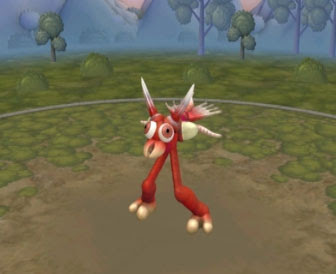 This little guy actually did quite well. He was a better predator than he appears to be. 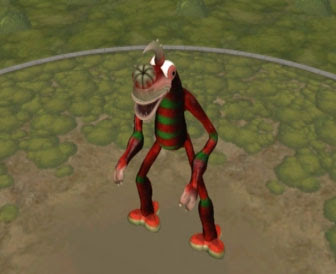 This iteration started seeing some problems. He was too weak, gawky and slow to be an effective predator. 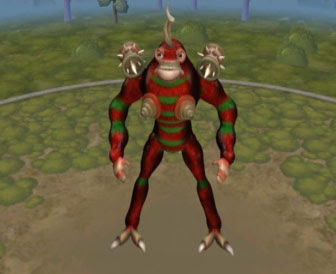 The current version. A mean combination of three great badasses - The Rhino, Lobo and Madonna!

The brilliant thing is that many of the weaknesses and challenges were more in my head than in the actual creature. I didn't want him to look wimpy and goofy and walk funny, so I bulked him up to appear meaner. And added the Tit-Shooters, horn and shoulder-pad-spiky-mean-looking things. Now I perceive him to be tougher and better equipped to handle the bad world of predator-ing. The personal connect you have with your creation is really strong. As a creator, you feel it's your responsibility to give them the tools and abilities to prevail. And you share in their trials, tribulations and triumphs.

This is fun. Watch for more updates on tribe, civilization and space stages. This is genuinely an important, revolutionary game that takes the art form forward.
Posted by Anand Ramachandran's Evil Twin at 4:07 AM