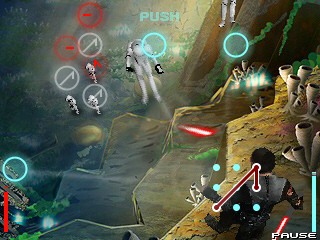 The Light Side : Cellweaver is oddly addictive. Nice looking backgrounds.

The Dark Side : Completely on rails, no freedom of choice. John Williams' famous score sounds a bit tinny.

First out – this isn't an exercise in comparing the N-Gage version to its console counterparts. This is a wholly different game that shares the same name – so attempting that would be pointless and stupid.

Having got that out of the way, here goes.

Is Star Wars : The Force Unleashed the best mobile game ever made ? No.

Is Star Wars : The Force Unleashed a fun to play game that's worth the price of admission? Hell, yeah.

The basic hook for the N-Gage (and mobile) version of The Force Unleashed is the much touted 'Cellweaver' input system, which is the heart and soul of the game. Essentially, you need to 'weave' patterns using the d-pad, which correspond to actions your character will then perform. Think of it as a hybrid of the 'gesture' based systems used in games like Arx Fatalis and Black & White, combined with the quick button matching sequences from Shenmue and God of War. In fact, it's really just a sequence of button presses, the 'pattern' just serves as an easy visual way to remember and identify the input sequence.

All this sounds a bit complicated and clumsy, but it really isn't. A few minutes into the game, and you'll be using Cellweaver effortlessly to unleash your awesome force powers on hapless foes. The game also does a great job of easing you into the controls – introducing new powers gradually, so you're never overwhelmed. Throughout my playing time, I never found myself forgetting the pattern for even a single force power. Once you get used to it, it's a pretty comfortable and interesting system.

Okay, okay – enough about the input system, what about the game?

The Force Unleashed on the N-Gage is a fun, mildly addictive and wholly enjoyable title that will doubly appeal to Star Wars fans, of whom there is no shortage.

The story is a very abridged version of what happens in the console versions – tracing the journey of Darth Vader's secret apprentice as he helps the Sith Lord hunt down and eliminate the last of the Jedi. I don't want to include spoilers, but rest assured that all is not as it seems. For Star Wars fans, the storyline fills in what happens between 'Revenge of the Sith' and 'A New Hope', so that in itself is a good reason to play through.

The graphics are a mixed bag – the pre-rendered backgrounds look absolutely stunning, and bring to life the Star Wars universe. Locations like the legendary Kashykk and Felucia make for a very pretty gameworld. The 3D character models and animations do look a little jaggy and rough around the edges, but thanks to the surprisingly relentless action, this isn't as big a problem as it seems.

The action itself is completely on rails – you have no choice in moving your character or choosing a path. You'll begin on one screen, dispose off a few enemies using your force powers (no lightsaber action, sadly), then your character will automatically run to the next screen. Wash, rinse, repeat. A lot of critics have panned the gameplay as repetitive – and yes, it is. But it isn't boring by any means. Consider Diablo as an example – gameplay can't get more repetitive than that game's endless 'clicking'. But was it boring? There's your argument.

The Force Unleashed is nowhere as addictive as Diablo, but the combat is surprisingly intense and tactical, especially on a higher difficulty setting. You'll have to quickly decide which enemies to dispatch first, choosing ideal force powers to deal with them. You'll have to use defensive powers such as heal and shield smartly. It's all great fun, if you enjoy this sort of game.The boss battles and certain specific scenes also call for some amount of puzzle solving using a clever combination of your force powers. This adds some welcome variety to the gameplay as well.

Once you're done with the story mode, there are also a bunch of survival challenges to be played, where you'll have to fight off waves of enemies and survive for the longest time. You can also replay any of the specific chapters in any order.

Being a hardcore Star Wars fan, I quite enjoyed my time with The Force Unleashed on N-gage. If you're not into Star Wars, I'm not sure how much the game will appeal, really, but it still holds up pretty decently as a standalone experience.

Final Verdict : Star Wars : The Force Unleashed on the N-Gage is an unusual and enjoyable game in its own right. Those who expect an action game similar to the console version will be disappointed, but if you approach it with an open mind, you'll find many hours of fun.

Posted by Anand Ramachandran's Evil Twin at 2:28 AM