Old technologies never die, they just make their way to mobile phones. That sly devil John Carmack is at it again, pushing technology where it hasn’t gone before.

This time, it’s on those Java games that make mobiles so much fun.

Using old school techniques that were used to crank out PC games in the late ’80s and early ’90s, he’s delivered games like DOOM RPG and Orcs & Elves on the mobile platform. And boy, are they fun to play. 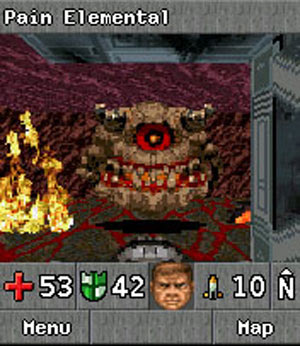 Remember these guys? Now you can get your butt kicked by them on your phone as well.

These games resemble old RPG classics like Eye of the Beholder and Dungeon Master, which were early examples of first-person RPGs on the PC.

These pioneering games were very popular at the time and paved the way for the eventual success of games like Morrowind and Oblivion.

Now, the same gameplay that charmed people 20 years ago is weaving its magic on mobile phones appealing to new gamers and nostalgia buffs alike. 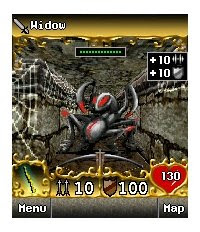 Orcs and Elves is a must-play for hardcore RPG fans who possess a "Mobile Phone of Gaming +1".

This just goes to prove an old chestnut Gameplay is Everything. Show someone on a PC a game like Orcs & Elves and they’d scoff at it. “Ugly graphics” and “simplistic gameplay” would be among the abuses hurled.

However, put it on a mobile phone, a platform on which expectations are considerably lower, and the ‘oohs’ and ‘aahs’ return. So the emergence of mobile Java gaming as a growing platform has opened the floodgates for games with proven gameplay mechanics, but technology and techniques from a bygone age.

Since today’s mobile phones are roughly as powerful as PCs from an earlier era, this is an absolutely brilliant idea. Instead of re-inventing the wheel, deve-lopers have a ready-made reservoir of ideas and content to quickly deliver great gameplay to eager gamers. People get fantastic games at a low price, which will run on very average handsets. The old games get a new lease of life, and a new generation of gamers is introduced to their magic. Everyone wins.

My currently installed games list reads like a library of PC classics Pro Evolution Soccer. Doom, The Sims 2, Age of Empi-res, Civilization 3, Baldur’s Gate, Assassin’s Creed and Call of Duty 2. These are all enjoyable adaptations of their more famous PC and console counterparts.

The price is sweet as well, with most of these titles costing anywhere between 5 to 10 dollars online. If you look around hard enough, you’ll also find a lot of free demos and giveaways.

What this means is that there are tons of great games to turn your mobile phone into a device that offers endless gaming pleasure. Whether you’re looking for simplistic, quick-hit gameplay or more involving experiences, there’s something on offer.

The thing is, you don’t even need a fancy high-end phone to play these titles. Any mid-range Java-enabled handset will do. So you actually have no excuse not to try these games.

And the future looks bright, too. Maybe, after 20 years or so, we’ll be rediscovering Bioshock and Fallout 3 on tiny mobile phones, which will by then have the power to run our current favourites as ‘retro’ classics. Isn’t that a delicious thought?