20. Shadow of The Colossus 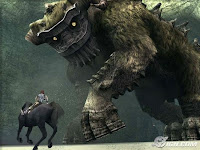 There are games that make you laugh. There are games that make you angry. And there are games that make you afraid. But it's a rare game that has the power to make you cry – and therein lies the beauty of Shadow of The Colossus. Sure, it had the hugest creatures seen in any game – bosses so big, they didn't END the levels, they WERE the levels. Sure, it had incredibly cinematic action that was as much fun to watch as it was to play. But as you hunted down these majestic, dignified creatures for your own selfish needs, the losses your character went through as you approached the game's end genuinely stabbed at your soul. If you had one, that is. Why it hasn't had a sequel is one of the great mysteries of gaming. 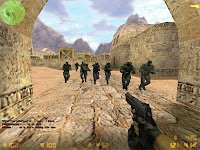 Yes, fanboys, we like Counter-Strike. It is teh_pWnZorr0xx0rrzzz. We agree. And it makes our top 50 partly because so many of you like it so much, you simply refuse to play anything else after all these years. Counter-Strike is arguably the greatest online shooter of all time, and to think it isn't even a standalone game. Gooseman Minh Le's Half-Life mod used to be the world's most widely played online game for several years, and continues to command a rabid, loyal fan base who refuses to play superior, more modern titles – that's what love can do to you. 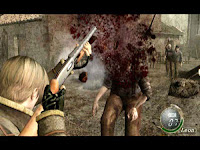 If there's anything that's more satisfying than shooting zombies in the kneecaps, and then shooting their heads off as they crumple to their (already shattered) knees, then we're yet to experience it. Resident Evil 4 was the biggest, baddest RE game – and featured some of the best character design we've seen. The Wii version also had some cool Wiimote based context sensitive controls – and was the first shooter to truly exploit the Wii's motion controls in a sensible way, paving the way for the many that followed. It also showed that more 'hardcore' adult games could be successful on the world's largest selling console. 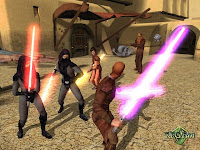 The best Star Wars experience of the past ten years wasn't a movie – it was Bioware's incredible role-playing game that made the XBOX the console of choice for the RPG hardcore. KOTOR had an epic Star-Wars storyline with a mid-game plot twist that is rivalled only by the one in Bioshock. A richly fleshed-out gameworld, great NPCs, enthralling lore, tense tactical combat and top notch graphics make KOTOR Bioware's second-greatest RPG, and that's saying something. Mass Effect might have been a better cinematic experience, but it's half the game KOTOR was.

Halo 3's delayed launch for the XBOX 360 proved to be a blessing in disguise, as Gears of War suddenly became the console's flagship game. And it proved incredibly influential, too – the now-famous cover system, the cool inter-squadmate banter, and third-person action mechanics are copied in almost every subsequent TPS. Marcus Fenix and Delta Squad also reinvented the online co-op experience, and gave us the 'space-invaders-on-steroids' that is 'Horde' mode in Gears of War 2. The series also gets a special award for popularizing the colours grey, brown, greyish-brown and brownish-grey.

Metal Gear Solid 4 is the staggering, mind-twisting conslusion to the Metal Gear saga, and is widely regarded as the most technically stunning videogame ever created. Hideo Kojima is the closest thing gaming has to an auteur – the MGS series seamlessly blends together characters, situations, gadgets and gameplay that range from the oddly familiar to the downright outlandish. The plots twist and turn like a Rubik's Cube crossed with Slinky from Toy Story, and by the end of it all, the good guys are the bad guys, the bad guys are still bad guys, and Solid Snake isn't who you (or even he, for that matter) think he is. It's by far the top-selling PS3 exclusive ever, and is one of the reasons that gaming is so wonderful.

What Indiana Jones is to cinema, Nathan Drake is to games (sorry, Lara, but you've got nothing on Drake) today. Uncharted is a strange best in that, it doesn't do anything particularly new, but it does everything to perfection – resulting in a cinematic action-experience quite unlike anything that can be reproduced in any other medium. More than any other recent game, Uncharted 2 shows us how games can be a mass entertainment medium that can deliver the 'interactive movie' experience that has been a chimera for both industries for years. It is the 'Avatar' of gaming – and indeed the prospect of an Uncharted 2 with Avatar's technology, say ten years from now, is a (quite literally) dizzying idea.

I recently called Forza Motorsport 3 the 'Diablo of racing games'. You just can't stop playing the damn thing. It features the most scalable, customizable difficulty settings seen in any game – and should serve as a lesson to all developers who want to make their games appeal to a wider audiences without losing their hardcore fan base. It's a polished, deep, engrossing racing experience that's as easy or challenging as you want it to be. Absolute videogame perfection, this. Plus – it has Bugatti Veyron pWnage.

12. The Elder Scrolls : Oblivion (and Morrowind) 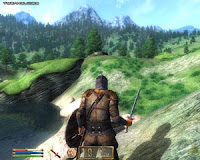 In my opinion, Oblivion is the second greatest single player role-playing game ever made. And it is the best 'pure role-playing' experience to be had in videogames. Ever. The Elder Scrolls games have their detractors who point to the stiff animations, the dull combat and the 'uncanny valley' factor – but these people are missing the wood for the trees. The basic role-playing system is absolutely spectacular, the gameworld goes far beyond the 'rip off Tolkien and be done with it' trope that even Dragon Age is prey to, and the sense of discovery and exploration in these games is unparallelled. Morrowind and Oblivion are gameworlds you can lose yourself in for months – you don't merely play these games, you actually live them.

Boldly setting aside the tired old World War 2 setting, Modern Warfare thrust players in a fictional war that loosely resembled the Iraq scenario, and focused on giving players the most intense and frenetic FPS experience ever. Sure, the campaign was brilliant, if brief – but Modern Warfare changed the face of online multiplayer forever. It had a superb leveling up system, and introduced unlockable perks, weapons and challenges that players could access as they grew in rank. It added a layer of depth to an already excellent multiplayer shooter, and soon became the most popular online shooter in the world.

Posted by Anand Ramachandran's Evil Twin at 8:58 AM