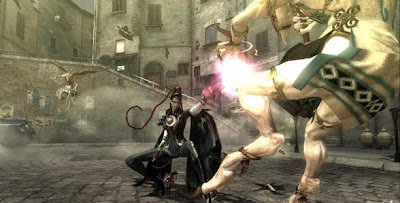 Japanese game design makes another breathtaking comeback with Bayonetta – the new action adventure from Hideki Kamiya, the creator of Devil May Cry and Viewtiful Joe. Every time you think that Japanese studios can't make weirder, more outlandish games, they go and surprise you by doing exactly that.

It's hard to describe the Bayonetta gameplay experience without sounding like a drug-addled lunatic, but I'll give it a shot. Bayonetta is a dark witch who has pistols in her hands. And she also has pistols that double as high-heels for her shoes. So she can, and does, shoot the bad guys while pirouetting, turning cartweels, leaping and somersaulting through the air, or just strutting around like a fashion model. She also has a variety of kicks and punches, but why bother with mundane martial arts when you can magically produce an iron-maiden and crush your foes in it? Or chop their sorry noggins off with a guillotine that appears out of nowhere? Or eat them by summoning a dragon, which used to be your hair, which used to be your clothes? You'll battle in gothic churches, broken clock-towers that hurtle through the air, abandoned train stations for dead souls – all to the beat of crazy techno music. Do I sound like a drug -addled lunatic yet? Good.

This is where Japanese game design really comes into its own – in the execution of ideas so crazy, so bizarre, that any sane publisher would immediately withdraw support. Luckily for us, the Japanese aren't sane. Which is why we get to play games like Bayonetta. Or Devil May Cry. Or Katamari Damacy. Or Loco Roco. Or Okami.

The Japanese have no problems believing that you can make a commercially successful game out of rolling really big balls using random junk, and using them to create stars in the night sky. Or one where you play a wolf-god and defeat your enemies using calligraphy (yes, calligraphy).

Even the more straight-laced games from Japanese designers, such as the Mario, Zelda and Metal Gear Solid franchises display a basic sense of fun and humour that defy conventional logic. Solid Snake hides from terrorists and other hi-tech enabled bad guys by climbing into a cardboard box, for heavens sake. Can you imagine the Master Chief doing that?

At some level, the Japanese realize that above all else, a game needs to be fun. If it manages that, it doesn't matter if it isn't realistic, or believable, or plausible. This is why they make bold, innovative games that don't puch the design envelope so much as tear it to shreds.

Shigeru Miyamoto, Nintendo's legendary creator of Mario, Zelda and Metroid, once said that he didn't understand why people always wanted to compare games to movies, and want games to be more like motion pictures. He stressed that Nintendo's design philosophy always aimed at creating games that could be enjoyed purely as games. No points for guessing which company sells the most games worldwide.

More power to innovation, I always say. I'd like to see more Bayonettas and Katamari Damacys among the inevitable deluge of derivative Halo and Call of Duty sequels. Thankfully, it seems to be happening increasingly. Good times.