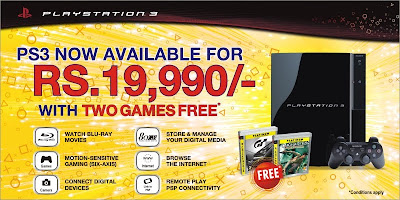 This is probably the best news Indian console gamers have heard for a long time – SONY is dropping the price for all 80GB PS3s in India to Rs.19,990/-, effective immediately. They're also bundling two great titles for free – Uncharted : Drake's fortune, and GT5 Prologue. Now there's a really sweet deal – so people, go out and get one. The PS3 is a great console to own at that price point, and considering it plays Blu-Ray movies as well, it's an offer that's hard to resist.

In India, where console penetration is reasonably low, this is a great move that should see a substantial improvement in PS3 sales. SONY has, by also aggressively marketing and supporting its PS2 and PSP consoles in India, proved to be the smartest and most dedicated of the console giants in India, and surely deserve to dominate the market. Microsoft bungled their first mover advantage, and at this point, I can't see anyone but dedicated online gamers (thanks to Live) choosing the XBOX 360 over the PS3.

But of course, along with the good news, Sony also typically provided some hilarity to please cynical observers such as myself. A sample from Peter Dille, Sony senior VP of marketing : “We track purchase intent very closely and we know that consumers have been interested in buying a PS3 for some time. A lot of people have been waiting for the price to come down. We understand that. That’s why this new unit has been configured and conceived.” Really, Einstein? You finally figured out that lots of people weren't buying your console because it cost about a couple of hundred dollars more than its competitors? Wow.

And, even more stunningly, there's something to keep the marketing retards busy : henceforth, PLAYSTATION™ will be known as PlayStation™. Seriously, SONY, do you think customers give a, pardon the language, fuck? And if the answer is yes, it took you this long to figure it out?

SONY makes a great console that now comes at a very attractive price. If only they would show a little common-sense and listen to their customers, instead of being insufferably arrogant and pompous, they would never have lost so much ground to Microsoft and Nintendo in the console wars. But wait, we're talking about a company which is planning to introduce the PSP Go. I'll shut up now because there's nothing more to say.

Posted by Anand Ramachandran's Evil Twin at 1:06 AM