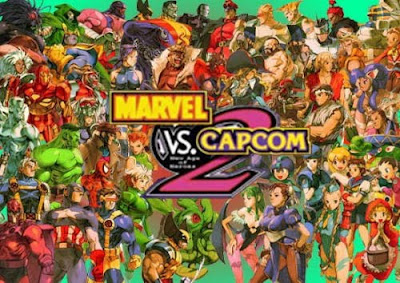 Now THAT is a roster. Other fighting games can eat their hearts out.


In a year that has already seen two of the finest 2-D fighters ever in BlazBlue and Street Fighter 4, the re-release of Capcom's old classic arcade fighter Marvel vs. Capcom 2 could easily have passed without much notice.

But, thanks to a brilliant fighting system that rewards the hardcore without being too harsh on n00bs, charmingly arcadey presentation that is retro in the most wonderful way, and a diverse and awesome 52 character roster, Marvel vs Capcom 2 takes its rightful place among the top fighters available today. 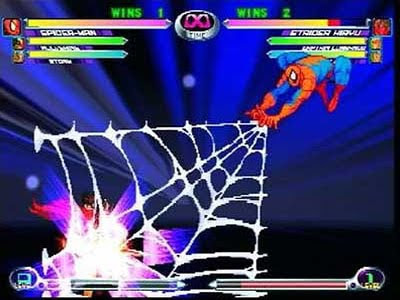 Spins a web. Any size. Catches thieves just like flies.

MvC 2 was a much loved game in its arcade and Dreamcast avatars, and thankfully, most the good stuff remains unchanged in the new version (available for download from XBOX Live in India). The arenas have been modified to fit the widescreen ratio, and this actually opens up a little more space for fighting, impacting the tactics ever so slightly. The sprites remain unchanged, and look great even today. It's not quite Next-Gen visual pwnage, but it's stylish and pacy and rather trippy. The character portraits which appear on the victory screen and the team selection menus are all immaculately drawn and hand-painted, looking terrific.

The fighting system itself is superbly designed and balanced. Every character is viable, and, if you invest the time to master each one's individual moves, you'll be rewarded with an incredibly satisfying gaming experience. MvC 2 doesn't confuse you with a bewildering array of moves like the Mortal Kombat series for instance. Each character has anywhere between eight to ten moves, including specials, all of which are easy to learn. The challenge is in the execution and timing – winning in MvC 2 is about intelligent team composition, control of arena space, mastering the timing of combos, assists and hypers. 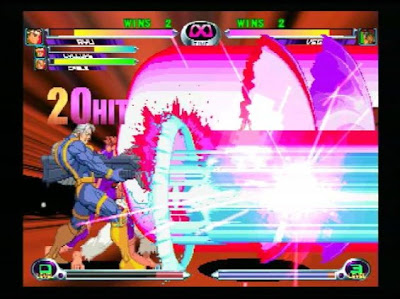 All fights in MvC 2 are tag-team, and you can tag a team-mate into play at any time. This is especially useful if one of your characters is taking a pounding – swapping him out for a teammate will restore some health, and the teammate may be better suited for a particular opponent. Smartly tagging your characters in and out is crucial to success. Also, depending on your combo-meter level, you can perform devastating double-team or triple-team hyper combos that deal serious damage. But, unless you time them well, your combos can be blocked or dodged, so desperate hyper-comboing isn't a guarantee of success. You can also forcibly knock an opponent out of the fight and swap one of his teammates in, another critical tactic you must master to focus on a weak opponent and knock him out. It's all very tactical and skill-based, and it's extremely satisfying to win fights after implementing a well-thought out strategy, combined with old-fashioned butt-kicking.

The character roster is also complete awesomeness – Spidey, Iron-Man, Hulk, Cap, Logan, Doom, Iceman and more from Marvel duke it out with Ken, Ryu, Zangief, Abel, Dhalsim and many other Capcom faves. Sights such as the tiny ServeBot growing to humongous proportions and flattening the Hulk with a cartoon hammer are incredibly funny (unless you're the one playing Hulk), and the move combinations are virtually endless. Every character has some great specials, and these are great fun when combined with two or more characters to create maximum carnage on screen. 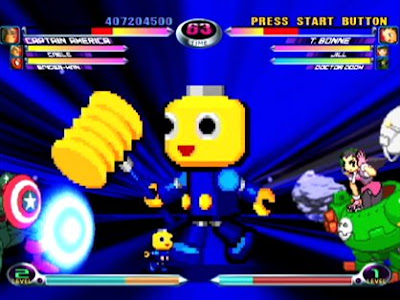 Servbot acquaints Steve Rogers with the power of a non-Mjolnir hammer.

With 52 characters in the roster, you can probably spend forever playing this game, even in single player. Add a smooth online experience, Marvel vs Capcom 2 is probably the best value for money 2-D fighter available in the market today.

Posted by Anand Ramachandran's Evil Twin at 2:40 AM