by Anand Ramachandan. This article first appeared on my weekly Game Invader column for The New Indian Express

The release of 'Bionic Commando' strikes another telling blow for fans of classic videogames who'd like to see modern remakes and reinventions of their favourite titles from another era.

Fans of Bionic Commando will get to finally experience the action of their favourite one-armed operative and his grappling hook in glorious, hi-definition 3D. And they'll be hoping that he would have finally learned to . . . er . . . jump. 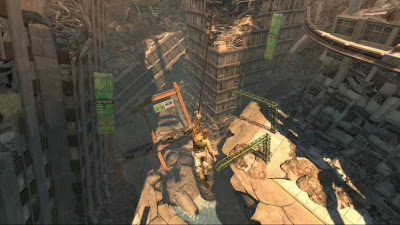 Bionic Commando. Now playable at BLUR in Chennai and Consoul in Bangalore. You should swing by. Pun not intended.

It's a good time to be a lover of classic gaming, with a whole bunch of titles being relaunched on a multitude of platforms from mobile phones to downloadables and virtual consoles. Remakes have always been popular with videogame fans, because they are always keen to see their beloved characters and settings in cutting-edge technology. Whenever gaming platforms evolve – with better graphics, sound and processing power – it opens up possibilities for remaking old favourites with a new, shiny coat of paint.

But why, then, do developers stubbornly refuse to remake some of the games I want to see in hi-def glory?

If ever a game cried out for a next-gen remake, it's the amazing PS2 classic, Shadow of the Colossus. Featuring the most gigantic bosses ever, the best videogame animal companion, a stirring score, and some of the most cinematic gameplay of all time, Shadow of The Colossus looked incredible when it made its appearance on the PS2. Surely, this game would be perfect for the PS3 to show-off its muscle? Or even a PC version that would knock our socks off? Why, Sony, why aren't you remaking it? Spoilsports. Imagine climbing up one of those humongous beasts, hanging on for dear life while it tries to shake you off and stomp on you, all in 5.1 surround and full HD. The mouth waters at the prospect.

Another old favourite I'd love to see remade is No One Lives Forever, the classic but sadly forgotten spy shooter that remains one of the finest examples of the genre. It was clever, witty, well-designed and challenging. And featured on of the sexiest protagonists in gaming – Cate Archer was waaaaaay smarter, hotter and more attractive than her more famous tomb-raiding countrywoman. NOLF is a game that would greatly benefit from the possibilities opened up by today's state of the art. And, after all the dark-as-doomsday shooters we've been playing of late, we could use a few laughs, and some old-fashioned spy excitement. Not to mention the delights of seeing Ms.Archer with more polygons doing the very creditable work of bringing her to life. What gamer would ask for more?

Other old classics I'd like to see re-imagined are Defender and Outlaw. Furiously flying a spaceship, shooting down mutants, and catching falling humans (okay, okay, humanoids) sounds like it would be a fun XBLA title at least. And Outlaw, the quintessential, bare-bones deathmatch experience, would be an outstanding online multiplayer shoot em up - I would happily plonk down cash for shooting opponents through fully 3D cactuses and stagecoaches, armed merely with a six-shooter. A little imagination, and these can surely be hugely successful games for the modern casual audience. Ironic, as they were once as hardcore as gaming ever got.

Of course, everybody's favourite reboot, the ill-fated Duke Nukem Forever, may now never see the light of day, with the closure of 3D Realms. But gamers worldwide will be hoping that someone picks up and revives the franchise, like what Bethesda did with Fallout3. And, as any gamer worth her salt knows, you can't keep The Duke down for long.

Posted by Anand Ramachandran's Evil Twin at 5:50 AM