Holding out for a hero

by Anand Ramachandan. This article first appeared on my weekly Game Invader column for The New Indian Express

inFAMOUS is the latest, greatest superhero game to hit stores – and it's a good one.

It puts you in the shoes of Cole, a regular guy who suddenly finds that he can leap from skyscrapers, shoot bolts of electricity from his hands, and scale up buildings with the nonchalant ease of . . .er . . . Altair from Assassin's Creed. You then proceed to rescue innocents, deal with creeps on the streets, and save the world from a mysterious conspiracy hatched by mysterious conspirators. You'll then divvy up your time between the rooftops, the mean streets and the festering sewers, performing all manner of cool stunts and unleashing your superpowers on unsuspecting (and suspecting) goons and baddies. Dizzying leaps, cars being tossed around, exploding barrels and good old fashioned fisticuffs – it's all there in a great mix of superhero and classic videogame action. 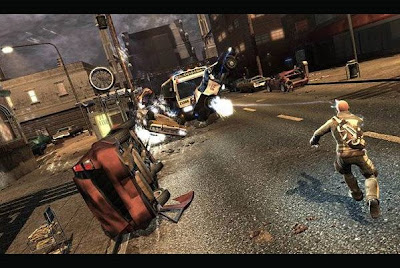 While it really isn't anything more than a next-gen mashup of ideas from games such as GTA, Spider-Man 2, and The Incredible Hulk : Ultimate Destruction, inFAMOUS takes these ideas and runs with them very well indeed. It looks great, and plays incredibly well. The combat is fun, exploring the world feels truly awesome, and the story, if you care to follow it, is fairly interesting. Importantly, Cole feels like a reluctant superhero who is slowly finding his feet within the meta-being business, understanding his powers. learning to control them, and making the moral choices that every true-blue superhero must eventually make. When you walk the streets, fighting beside the people, and restraining fallen bad-guys with an electric arc, you can't help feeling a bit righteous and all heroic (of course, I'm talking about when you make the 'good' choices). 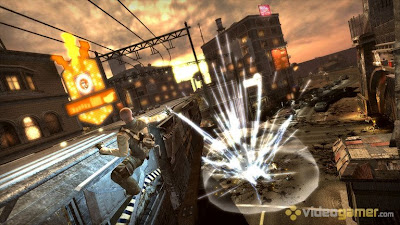 I'm sure Videep will cover the details in his upcoming review, but there's one aspect of inFAMOUS I'd like to examine a little closely – the very core superhero concept of keeping crime off the streets. Besides the main story, inFAMOUS features a number of side missions that, when beaten, result in a neighbourhood block being cleared of criminal activity, and earning the lasting gratitude of its citizens. As you gradually begin taking back neighbourhoods, and cleaning up the town, there's a sense of genuinely heroic satisfaction that unfolds – and that is inFAMOUS' greatest achievement as a superhero game.

Whether I'm playing a game as a famous superhero like The Hulk, or a videogame specific creation like Cole, my biggest motivation is felling like one. I want to help the defenceless, needy man on the street. I want to foil evil plots. I want to kick ass. I want to save the town, the world, the universe. inFAMOUS, by delivering a believable, vibrant gameworld that truly looks and feels like it needs saving, gives me the opportunity to do just this.

In a sense, that's why role-playing games like Oblivion, Fallout, Baldur's Gate and Neverwinter Nights appeal to me, they help me play the hero. But they don't let me do cool superhero things like leap from rooftop to rooftop, hand upside down from ledges while shooting electricity at faraway enemies, and plummet hundreds of feet and land with an explosive shockwave that sends cars flying in every direction. inFAMOUS is that sort of game.

Here's hoping it spawns more games that make you feel like a superhero, with the world at your feet. It's an opportunity for game developers to create entirely new, and lucrative, superhero franchises, which have traditionally always been born in comics. Developers, are you listening?

Posted by Anand Ramachandran's Evil Twin at 6:16 AM