What begins with a D and is the most addictive thing on earth? 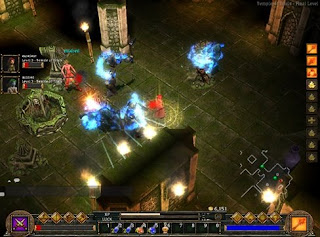 With Diablo 3 round the corner, click-fingers all over the world must be feeling a familiar twitch.

Diablo was one of the most important games ever made — along with Fallout and Baldur’s Gate, it revived and energised fantasy role-playing, catapulting it into one of the most popular and profitable of genres. It also established Blizzard as a studio with a reputation for making polished, fun and great looking games that would cut across gamer demographics and appeal to just about anyone. It started off the chain reaction that would give us Starcraft, Warcraft 3, and World of Warcraft — establishing some of gaming’s most successful games and franchises of all time.

But this isn’t about any of that. There’s one thing about Diablo, you see, that anyone who’s played it agrees upon. You couldn’t stop.

You would click-click-click-rightclick-click your way through hordes of monsters through the wee hours of the morning. You’d set up clever town portals that would teleport you to safety when things got hairy. You would test new weapons, and look for great treasures. But stop playing? Wait — just 10 minutes more.

Diablo (and its sequel), are without question the most addictive games I’ve ever played. Sure, Baldur’s Gate 2, Bioshock and scores of other titles are equally compelling. But there’s a difference. With those games, I know why I want to play — I’m playing to advance the story, to enjoy the gameplay some more, to lengthen the experience. With Diablo, there’s no rationale — other than how much fun it is, moment to moment. I’ve played Diablo for hours after it stopped being fun — my eyes and fingers would hurt, my brain would shut off, but my finger would keep clicking away, killing hundreds upon hundreds of evil, dastardly beasts.

Perhaps the only other game that I’ve found as addictive is the Civilization series, but the addiction comes from the challenge, and the promise of victory. With Diablo, it goes beyond that — it’s the hopeless, empty feeling that only an addict will recognise.

Such perfection in game design! Gameplay that’s so simple and fun that even the most inexperienced of gamers could quickly jump in. The game’s entire controls consisted of simply clicking, or right clicking the mouse. That’s it. If you could click, you could play Diablo, and have tons of fun kicking the collective butts of the forces of darkness. What could be a better formula for success?

Unimaginably cunning pacing, too. Each shiny new bauble — better armour, powerful weapons, cooler spells — was always round the corner, only a few more minutes of gameplay away. So you always thought you’d play for maybe five more minutes, before realising that hours had passed. True to Blizzard tradition, the Diablo games also featured the best visual design and music to be found in gaming, and eye-popping cinematics providing the cherry on top. The visceral quality of Blizzard titles have always been cutting-edge, and never quite matched by anyone else.

Now Diablo 3 is almost here. The gameplay videos on YouTube and other sites have the fans drooling in anticipation. The release date hasn’t been announced yet, but the game is expected sometime next year.

Better quit my job, and keep myself free through 2009, just in case! Do I sound like a Blizzard fanboy? Damn. And I haven’t even mentioned Starcraft 2 up to this point!