Give the Dwarf a Flamethrower!

The most interesting games are those that do unexpected things.

When I play a game with elves, dwarves and orcs, I expect to see halberds, longswords and horsemen. Not flamethrowers, flintlock pistols and tanks. Surprises like these immediately make me sit up and take notice. That’s why games like Arcanum, Final Fantasy and Warhammer are so engaging — they take place in universes that are rich with unusual concepts and delightful surprises. 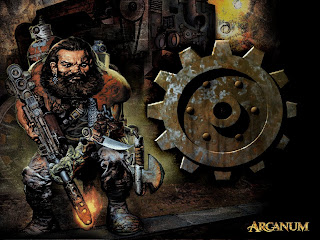 Arcanum featured a wholly unique and fascinating gameworld that is still remembered fondly by those who played it. It cries out for a sequel, really. Are you listening, Bethesda?

These games take the disparate worlds of high fantasy and science fiction and combine them interestingly to create whole new experiences. I dig fantasy. I dig sci-fi. So I totally dig games that give me the best of both. Frying a horde of orcs using space marines equipped with jetpacks and flamethrowers? Attacking a dragon with tanks and rocket launchers? Yes, please. Make mine a double.

Arcanum was a particular favourite for me. Yeah, the combat sucked, and the graphics were a bit tacky, but the writing and story were top-notch and the roleplaying system was truly interesting and unique. The setting was remarkable — a steampunk world where the conflict between magic and technology served as a backdrop for some very interesting combinations — pistols, mechanical traps and gadgets squared off against fireballs, meteor storms and charm spells. Orcs and gnomes wearing bowler hats and tuxedoes took the train to work at restaurants and jewellery shops. Arcanum had wizards, chemists, furnaces, machinery, guns, dragons, ogres and much, much more. An unforgettable game for those who looked past the flaws and played through to the end.

Interesting gameworlds created by putting together diverse, unexpected elements occur surprisingly often in videogames. American McGee’s Alice (Alice in Wonderland meets Gothic punk), Bad Mojo (you played a cockroach running around in an apartment), Katamari Damacy (er . . I’ll forget about even trying to describe this) are only a few examples where doing something unexpected to the setting greatly enhanced the game experience.

Dungeon Keeper was another title that did things differently. Instead of being the heroic adventurer, you were the evil dungeon keeper, who had to breed monsters, lay traps and come up with other dastardly ways to destroy the very same heroic characters you have played as in countless other games. It is a refreshing spin that breathed life into an otherwise unremarkable game. More recently, the game Evil Genius gave the same treatment to a more modern setting of James Bond-like secret agents, impossibly convoluted technologies and plans of world domination. By putting you in the role of the evil villain, these games provided the interesting twist of participating in familiar looking events from an unfamiliar perspective.

The superlative Super Paper Mario pulls of the brilliant feat of taking the beloved gameplay of Super Mario Bros, and, quite literally, adds a new dimension. By flipping between 2-D and 3-D perspectives, the game creates an ecosystem of puzzles, solutions and situations that are at once familiar yet refreshingly different to fans of the Mario series. The pleasure of finding hitherto unexplored ways to overcome the challenges of Goombas, Koopa Troopas and Piranha Plants is great fun indeed. PSP titles like Crush and Ecochrome also use similar ideas to deliver great puzzle based gameplay.

So if you’re bored of shooting nondescript aliens with standard issue plasma weapons, tired of slaying orcs and goblins with your +2 sword or sick of driving over innocent civilians in sprawling virtual cities, try something different. Like tossing a hand-grenade at an orcish shaman.