In which a Taxi for Sure driver threatens to bring 200 friends to my house and kill me. And yet I reach the airport like a boss.

Update :
Taxi for Sure customer support called me and we had a chat. They said that they would take strict action against the driver. I appreciate that they called and seemed genuinely interested in the feedback, and in solving the problem.
I told them that's their call, but I'm not sure that would solve any problems. I suggested that if this was the first time that the driver had behaved like this, they should probably just tell him to take a chill pill and not do this to any other customer.
I'm not interested in Taxi For Sure punishing the driver or not. He and I both had a bad day, and we both deserve whatever comes our way.
I used some bad language (provoked by his incessantly rude behaviour, which nobody seems to care about). For which I apologized multiple times immediately.
He wasn't interested in my apology and threatened to kill me in a "I know where you live and I will bring my goon friends and break your neck" way. And he threw me out of the cab. And charged me full fare.
Some of you think that I deserve death threats because I said "fuck" and that the driver was justified in his actions.
Sure. That's your opinion. I don't agree. And I don't care about your opinion anyway. Just like you don't care about mine.
Excelsior.
-------------------------------------------
Dear Taxi For Sure,
It's been an entertaining morning. A driver from Taxi For Sure threw my colleague and me out of a cab. And, for good measure, threatened to bring hundreds of his taxi driver buddies to my home and end my miserable life. And the sun wasn't even up yet.
But I'm getting ahead of the story.
I'm writing this from Delhi.
And I got here no thanks to Taxi For Sure.
My colleague picks me up at 5.30 am in a cab, to go to the airport. We request the driver to pick up another colleague from Koramangala. He cribs and complains about this. Then picks up the phone and talks to who must be his boss. More complaining yakkety yak about said detours. He sounded like an ISRO scientist would if we had requested the Mars lander to pick up some cheese from the moon on the way to the red planet. Pretty upset.
"Sir extra 300 rupees"was the net outcome of this animated conversation.
I assured him that I had no problem with this. "Sure. No problem", I said.
The guy continues cribbing and complaining into my ear about how we have no doubt ruined his carefully laid plans for the morning by asking him to perform the painful task of driving his cab a few extra kilometres. No doubt his world domination schemes now lay in complete disarray, thanks to our callous request.
So he keeps talking.
I tell him "Boss. 300 rupees. No problem. Now shut the fuck up and drive".
He stops the car. Starts yelling. Tells us to get out of the car. Apparently the use of the word "fuck" and "shut up" are not on.
I apologised instantly, cursing myself for screwing up my colleague's morning. He's a gentle guy and looked terribly uncomfortable with the whole situation.
I apologised multiple times, and told the guy I shouldbn't have used those words. Now can we go to the airport please?
The driver continues to abuse. And then threatens me with violence. He says he will bring a couple of hundred of his merry taxi-driving buddies to my house and take my life.
At this point, I'm thinking it's probably a bad idea to ride in a taxi with a man, upstanding paragon of decency though he may be, who has expressed a more than casual interest in throwing a party, inviting his friends, and murdering me for fun.
So I start walking away. We're not far from my house. Worst case, I can just get my car and drive to the airport.
But Taxi For Sure's foot soldier was not done, evidently. Now he's harrassing my colleague, who has been trying to calm things down - and asking for full payment. I did a quick ROI, decided that the small sum of a thousand rupees was a small price to pay for significantly reducing the probability that I would be beaten to death by enough drivers from Taxi for Sure to fill a passenger jet. So I paid. And walked away to the sounds of incoherent yelling in a curious mix of Hindi and Kannada.
The guy was purple with rage by this time. I suppose he was a bit disappointed that he did not get to fulfil his fantasy of group-killing a senior game developer at Iblur junction. Or maybe he didn't like the fact that I paid so easily. I don't know.
A bit later, Taxi for sure sends an apology. It is most amusing. Here are the text messages from Taxi for Sure. 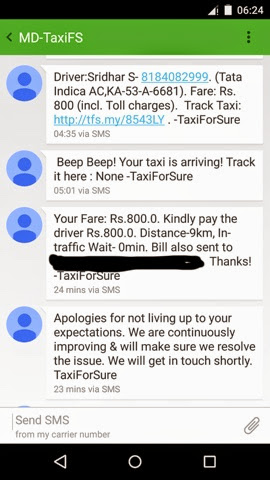 While Taxi For Sure's driver's obnoxious (and psychopathic) behaviour considerably dampened my mood in the morning, their apology lifted my spirits instantly.
"Apologies for not living up to your expectations. We are continuously improving and will make sure we resolve the issue" it seems.
No problem, guys. I readily accept your clearly heartfelt apology. I will forgive the fact that your driver Mr.S.Sridhar (phone number 8184082999 , Tata Indica no KA-53A-6681) threw me out of a cab at 5.30 in the morning, yelled and screamed at me and promised to murder me through the use of goondas. No problem.
But please also ask him to accept my apologies for saying "fuck"and "shut up" a couple of times. I already apologized to him multiple times, but he hasn't indicated yet that he's cool with that.
It would also be nice if you requested him not to go ahead with his plans to take my life. Just saying. It will negatively impact my studio's quarterly roadmap.
Thanks. And have a nice day.
Anand Ramachandran.
P.S.
How did we eventually get there, you ask ? Simple. Got an Uber.
Driver Ashok Kumar came, picked us up. Picked up my colleague. Dropped us to the airport.
I actually thanked him saying "Thank you. You saved us this morning. "
"It's my job, sir" he said, with only a hint of a smile.
Posted by Anand Ramachandran's Evil Twin at 10:59 PM

Email ThisBlogThis!Share to TwitterShare to FacebookShare to Pinterest
Labels: Taxi for Sure