Bioshock 2 and the challenge of extending Rapture

by Anand Ramachandran. This article first appeared on my Game Invader column for the New Indian Express 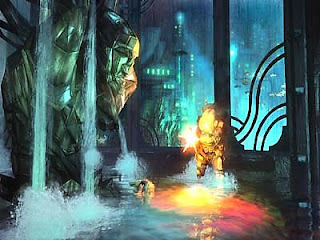 Rapture is a beautiful gameworld, but rather hard to expand upon.
When Bioshock was first released, it was rightly hailed as an instant classic. However, it was also praised to the heavens for its innovation and gameplay, which was rather baffling. Bioshock's strengths lay in its superb story and breathtaking setting. The visual and sound design were among the finest in the history of gaming, and, as everybody knows, it had the “best water effects ever seen in a videogame”™. The gameplay, however, featured no real innovation (younger gamers – please refer to System Shock 2), the gunfights were cookie-cutter, and the way the game handled player death effectively devalued any real tension the player might have felt during the combat. So while Bioshock remains a triumph of fantastic, atmospheric videogame storytelling, making a sequel was always going to be problematic.

And now, with Bioshock 2, our fears have been confirmed. While the sequel is indeed an excellent game, it simply doesn't blow us away the way its predecessor did.

Because, with Bioshock, the developers painted themselves into a bit of a corner in a couple of ways.

First, they chose surface (story, visuals, sound) over core gameplay. Since the surface was so astonishingly brilliant, this didn''t matter the first time around. But, in a sequel, it was always going to be hard to top that effort, and hence player disappointment was almost guaranteed. Even though Bioshock 2 does feature a great story and impressive presentation, it still lacks the 'wow' factor, because the initial bar was set so high. And, in the absence of these things, the gameplay doesn't hold up very well. Games like Halo and God of War don't really need any major innovations in story or visual presentation, because the core gameplay is so much fun that anyhing else is a bonus. Games like these are perfect for churning out sequels, because fans care only about the gameplay – even small innovations or additional features will keep them interested. Halo 3 is a classic example – I enjoyed every minute of the campaign, although I can barely remember what the story was about.

Second, they created a gameworld that, while being splendid and beautiful, is terribly hard to expand upon. The fiction of Bioshock firmly locks Rapture as a single underground city, the vision of one man, now a complete, dystopian wreck, overrun by lunatics and abominations. While it is theoretically possible to jump through a few hoops and contrive ways to expand the game's universe, the solutions would probably still feel just that - contrived. Bioshock 2, which is set in the same Rapture as the original, still feels fresh yet familiar, but it's hard to see the gameworld sustaining interest through yet another sequel. This is even more important for a game that depends on story and setting to hold the players' attention. Contrast this with the gameworlds created for games such as Halo, Fallout, Mass Effect or Dragon Age – all open worlds which make it easy for the designers to add a planet here, a forest there, a dwarven ruin here and infinitely extend the gamer's virtual playground. While I again reiterate that it's certainly not impossible to extend the world of Rapture, it is difficult to do it in a manner that wouldn't feel forced.

None of this would matter if Bioshock featured gameplay that would stand on its own, without the technical and creative wizardry to prop it up. Sadly, it doesn't. Which just demonstrates that old “gameplay over story” chestnut in emphatic fashion.
Posted by Anand Ramachandran's Evil Twin at 5:41 AM