by Anand Ramachandran. This Article first appeared in my Game Invader column for The New Indian Express 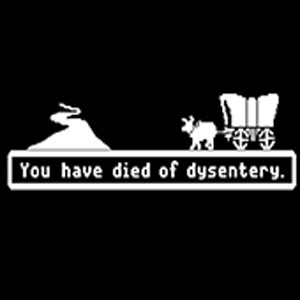 The iconic death screen from 'Oregon Trail. Never heard of it? Look it up. Now.

Death in videogames is almost as old as the medium itself. A huge percentage of early arcade games had the concept of 'lives' – die three times, for instance, and you'd see the dreaded words 'GAME OVER' on your screen. The concept of 'death' was so ingrained into the medium that even in games where you didn't technically 'die' (you'd just miss catching something, or hitting something) you'd still say things like “I have only two lives left” or “I died”.

Soon enough, most genres replaced the idea of a finite number of 'lives' with the concept of 'health' or 'hit points'. You'd start with, say, a 100 hit points. Whenever you did something stupid, like take a rocket launcher in the face, or fall off a cliff, you'd lose health. When your health was completely depleted, you would die. This was probably done to make games more accessible and forgiving to players – the concept of 'dying' because of a single mistake was pretty harsh. And games were difficult back in the day – a single touch of an 'enemy object', such as a bullet or a spike or the enemy itself, would result in instant death in games like Donkey Kong, Pac-Man or Space Invaders. The 'health' concept at least gave players some room for error. Of course, this also made scalable difficulty easier to implement, since the 'degree' of damage could be controlled.

More recently. Many games began to dispense with the idea of 'health' altogether, favouring a damage system where you would die only if you took sustained damage for a period of time. If under fire, the gamer would simply have to take cover for a few seconds, and 'health' would be restored to normal. Halo : Combat Evolved was probably the first game to successfully implement this feature, and today even role-playing games like Mass Effect 2 have followed suit.

It's fairly logical – gamers hate to die. They hate to have to constantly re-load old save games and play through difficult segments repeatedly. Combined with automatic checkpointing systems, these new ways of approaching player death have made games more fun for the average player. In fact, the legendary LucasArts adventure games (Monkey Island, Sam and Max, Full Throttle) did away with the concept of death altogether – you just couldn't die or get hopelessly stuck in a LucasArts adventure. Hardcore gamers scoffed at this, and missed the frenetic tension of desperately clinging on to the last 'life' or miniscule 'health' – playing extra carefully until a reprieve in the form of a 1-UP bonus or health-pack could be found. At least they still have Super Mario Bros.

Now, the recently released 'Heavy Rain' treats death in a wholly new and intriguing way. The game features a parallel narrative technique where the player controls different characters at different points in the game, experiencing the storyline from their converging viewpoints. And if one of the characters happens to die, due to a choice the player makes, the story simply continues – and the death of the relevant character impacts the way the rest of the story pans out. It's very clever and exciting – and could change the way games tug at our emotions. Sure, games like 'Wing Commander' and 'Final Fantasy 7' featured emotional death scenes that impacted the story, but never of a character that the player controlled.

If it works well, interactive narrative would have taken another bold step. If not – oh, well. There's always conveniently placed exploding barrels.
Posted by Anand Ramachandran's Evil Twin at 4:30 AM