The King of Fighters? Don't think so.

It's been an incredible year for 2D fighting games. Street Fighter IV announced itself as perhaps the finest the genre has ever seen – featuring gameplay that walked the fine balance between pick-up-and-play and truly hardcore, a superb online experience and great visuals. Marvel vs Capcom 2 was a great revival of an old favourite franchise, with one of the largest and most interesting rosters of all time. BlazBlue was a breath of fresh air to the genre, and created what could turn out to be a blockbuster franchise in the years to come. 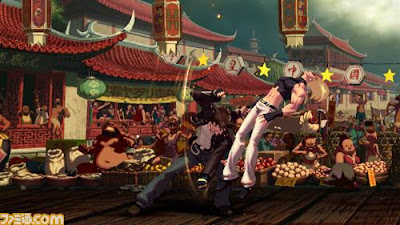 Amidst all this excitement, it's hard to understand why anyone would bother with a thoroughly mediocre title like the King of Fighters XII. The latest in the venerable franchise is a classic example of what not to do with a sequel – a laundry list of game design don'ts.

In case you get the wrong idea – let's make it clear that the basic fighting system in KOF XII is as solid and sophisticated as ever. All the classic 3-on-3 team fighting mechanics that made it a much loved title on the Neo-Geo platform return in the latest version, with some small tweaks and additions. There are improved knockdown attacks and juggles that open up new offensive possibilities. There's a new critical counter system that, if timed perfectly, stuns your opponent and renders them vulnerable to offensive chains. It's a system that has stood the test of time, offering equal opportunities to offensive and defensive players – but it's really a no-brainer for the development team, who were working with gameplay that has been honed over fifteen years.

They've got almost everything else wrong.

The visuals are fairly decent, but given the achievements of Street Fighter IV and BlazBlue, they don't really hold up. The backgrounds are decent but not spectacular. The sprites are animated fairly well, but still have a jaggy, retro look. While this is fine for a truly retro title like MVC 2, they don't quite cut it in a full price game. But it's fine, really. The visuals would be tolerable if the rest of the game wasn't so broken.

You see, the essential problem with KOF XII is that there's nothing to do. Offline, there's a basic single player mode, a versus more, a training mode, and some unlockable art. That's it. No challenges, no story mode, no survival, nothing. In this day and age, for a full-price game, that's simply unacceptable. The single player arcade mode is essentially a time trial – there is no boss character to play, and no reason to play repeatedly. This game is only fun when you're playing it with a buddy on the same console.

The online experience could have perhaps justified the price, but it's simply awful. The lag is terrible – a deal breaker for a fighting game where timing is everything. You can't find players with decent connections. You can't quit out of spectator mode until the bout is over. 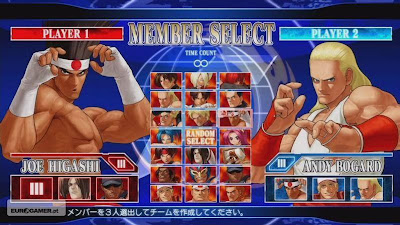 Better learn to love this menu - because you can't quit out of it.

Even more unforgivable – the game's offline and online menus appear to have been designed by either incompetents or sadists. For instance, you can't quit from the character selection screen to the main menu – you have to first start a match, and then quit to the main menu. This deserves a resounding WTF? It's ridiculous that a game this broken made it to retail.

KOF XII's lack of features and bad design combine to catapult it into 'disaster' territory. Avoid this, and spend your money on Street Fighter IV or BlazBlue.

Posted by Anand Ramachandran's Evil Twin at 6:26 AM