By Anand Ramachandran. Some of you will recognize the inspiration for the title, some of you won't. That's fine, right?

The Suresh Kalmadi - Mike Hooper spat has degenerated into 'beyond ridiculous'. Kalmadi has always been a great source of entertainment over the years (anyone remember the Afro-Asian games, and the speech he gave there?), but this time, he's got some competition from one of his colleagues, A.K.Kesri. Here's a scan of a letter Mr.Kesri wrote to the chairman of the OCCWG, from today's INdian Express. (Thanks to @abithaanandh for the keen spot. She has an eye for this kind of thing, she's the one who discovered Hungama for us.) Do click on the image for a full-size version. Trust me, it's worth it. 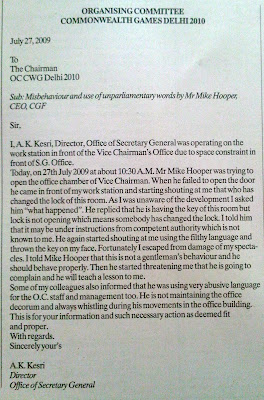 Among my favourite parts are "fortunately I escaped from damage to my spectacles" and "always whistling during his movements in the office building", but you will surely find many others to your tastes. Stunning stuff.

Actually, the whole affair seems to be an adult version of a 'Miss! He's taking my pencil box, miss!' type of incident so commonly experienced during the primary school years. To be fair to Hooper, however, I must admit that it is Senor Kalmadi, Herr Bhanot and others who are leading the childishness sweepstakes at the moment.

The reasons given by Mr.Kalmadi calling for Hooper's ouster have been, in a nutshell, that Hooper has been of no use, he has been rude to OC personnel, demoralizing them with negative feedback and that he has been an impediment to work on the games.

This can be roughly reworded as follows :

But since the gentlemen, and I use the term very loosely, who are involved in this unsightly brouhaha are only corresponding through letters and press-releases, I think it would perhaps be more appropriate to look at the issue from that POV.

You are useless. You are spoiling my birthday party. So please leave our school. Go back to your old school.

I'm not useless. You're only useless. You always make things very late. Your party will be late and boring.

Shut up. You always tell bad things to my friends and use bad language. You're a bad boy. I tell to principal.

You shut up. Principal is my uncle, so you can't do anything. I'll tell him you're stupid and you're always late for everything everytime.

And so on. I think all of them should be sent to detention, and the party cancelled.
Posted by Anand Ramachandran's Evil Twin at 11:25 PM