The company I work at, A Bellyful of Dreams Entertainment, is creating some comics for the Kolkata Knight Riders web site. The comics are all based on Hoog Lee, the KKR mascot which was created by my colleagues Shashi Sudigala and Raj Golay.

The comics are essentially aimed at a younger audience (approximately 8 t0 12), as the KKR franchise is looking to create a strong brand equity with this age group, presumably to leverage SRK's popularity among them. But for that, I guess the team needs to, like,win a few games :)

The two strips I'm posting below are written by me and drawn by Ashish Padlekar. Click on a thumbnail to see the full strip. 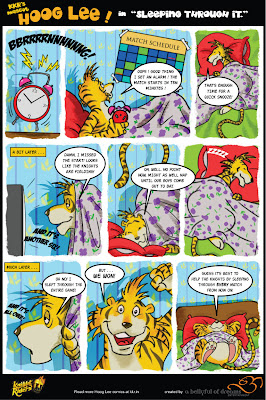 We're also doing some single-panel stuff written by Ravi Abburi and drawn by Raj Golay. Am including a sample below, but you can head over to the KKR site for more. 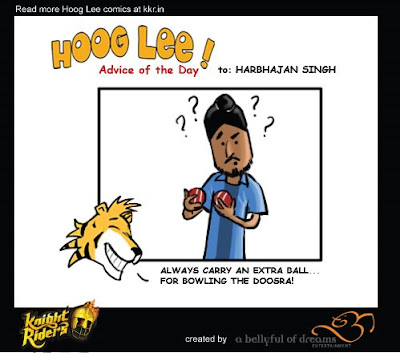 Will keep you guys posted on more developments.
Posted by Anand Ramachandran's Evil Twin at 3:39 AM