Love in the time of videogames.

This article first appeared on Valentine's Day in my weekly Game Invader Column for the New Indian Express. They changed the title to 'On Crush this time, not crash'! WTF? They obviously didn't get the reference.

A gaming column for Valentine's day?

I was tempted to free associate from 'Valentine's day' to 'heart' to 'blood' and then write a nostalgic piece about the 'ten bloodiest videogames of all time'.

But no. That would not be appropriate.

Gaming's greatest hero is also probably its greatest romantic. For almost three decades, Mario has had but one reason to exist – rescue that careless Princess Peach from Kong, or Bowser, or whoever else felt that inevitable urge to kidnap her and whisk her off to some castle. He'd leap chasms, fight off all manner of creatures, swim through drains, cross deserts and lands of fire and ice, and even fly through space to save Peach and bring her back to Mushroom Kingdom. What a man, eh, ladies? If only he'd shave off that silly Anil-Kapoor like moustache and swap those overalls for something nicer. 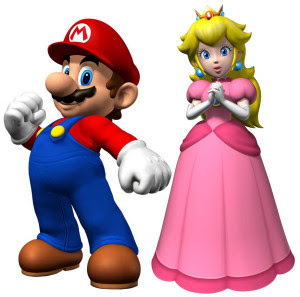 Mario has been single-mindedly rescuing his serial-kidnapee lady love for over twenty-five years now. Dump her, dude. She's one careless dame.

Shigeru Miyamoto also created another serial princess-rescuer in the main protagonist of the Zelda series – Link (who bears an eerie resemblance to Peter Pan). Though Link, too, has been rescuing Princess Zelda for almost as long as Mario, he's less single-minded about it – taking time off to explore random caves looking for treasure, and running all sorts of errands for his fellow villagers. Unlike Mario, who is permanently running full-tilt towards his goal, Link goes about the business of princess-rescuing in a more leisurely manner. But hey, at least he's clean-shaven.

Bioware games have always had a romance track – your character could fall in love with one or more of your fellow NPCs, and, depending on certain choices you could make, the romance would unfold in different ways. Baldur's Gate 2, Kotor, Jade Empire and Mass Effect all had romance sub-plots.

But surely none of these matched the chutzpah of Fallout 2 – where your character, regardless of Gender, could end up married to a particular character (Davin or Miria). It was a hilariuos, shocking, unforgettable moment, where if you attempted to flirt with one of these characters, you'd end up in the sack, and the character's father would bust in and do a Muthalik – forcing you to get married! And you'd then be saddled with a gay (or straight) spouse who would faithfully follow you around for the rest of the game. Unless they were killed by a Radscorpion or a Deathclaw. Or you sold them to slavers. Delicious.

Role-playing games seem to be a perfect fit for some sort of romantic element to the gameplay, even if it is usually only some sort of minigame where you need to some 'love meter' up to a certain level by doing silly tasks to please your prospective lover. Hey – waitaminnit – just like in real life! Messrs. Molyneux and Wright may be on to something after all!

There are also several delightful (or icky, depending on your POV) tales of people meeting online in games such as Everquest or World of Warcraft, and then getting hitched in real life. Conversely, there are also tragic (or uplifting, depending on your POV) tales of people getting divorced over disagreements arising because of these games as well. I could mention Second Life, but since it Second Life isn't a game, I'll pass.

But I believe that gaming would have well and truly arrived when a couple would look forward to spending Valentine's Day playing Chainsaw Melee on Gears of War 2 for six hours straight. Now that's romantic.

Posted by Anand Ramachandran's Evil Twin at 1:56 AM