Gaming : One Turn at a time.

This article first appeared on my 'Game Invader' column for the New Indian Express.

I love titles like Fallout 3, Call of Duty 4 and Dawn of War to the death, but my success rate in getting non-gamers to play them is abysmal. They'll watch and appreciate, but ask them to have a go, and most of them act as if they've been asked to perform some pointedly unpleasant task, and refuse hastily. Even those who do try are mostly defeated by the high learning curve, and give up after a few minutes of honest effort. These are smart people. They play chess and poker. They'd make fantastic gamers, if only the controls wouldn't get in the way.

Sure, they'll happily play a Wii or DS game or World of Goo or Peggle – but that's not what I'm talking about. How do you get a non-gamer to play a title in one of the traditional 'Hardcore' genres.

One turn at a time.

Yep, the answer is turn-based games, such as the Civilization series or Heroes of Might and Magic, which nobody would mistake for casual games, but offer a level of accessibility to a newbie thanks to their inherent turn based nature. 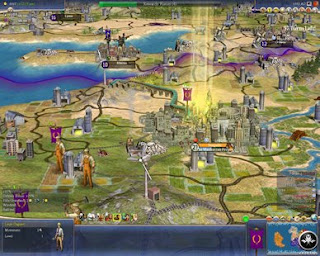 Civilization IV is a deep and richly complex game - but gives you all the time in the world to figure it out. Which is why it is so successful at attracting new audiences year after year.

These games give you all the time in the world to figure out their complexities and layers of gameplay. This is a huge advantage from a learning curve perspective – as it allows new players to focus on figuring out the gameplay without worrying about futzing around with the controls. Which neatly solves the one big problem that plagues modern FPS, RTS and RPG titles – complicated control schemes that frustrate first-time gamers.

In a turn based title, you can sit and think about your next move for as long as you wish, and the game will wait for you. In an RTS, remain idle for a minute, and your enemy will have likely destroyed your base, killed off your army, and brushed his teeth with your defeated ass.

This means that a newbie playing Civilization or HOMM is focussed on discovering the many delights of the intricate, strategic gameplay and meeting its challenges. Even if they find it initially difficult, they won't be put off from trying again – because, importantly, they believe that they can get better and beat the game.

Because it's interesting to solve puzzles and figure out solutions to challenges in a game. It's fun to choose technologies, negotiate with rival world-leaders, choose combat strategies, plan cities, and order manticores to attack battle-dragons.

But it's a drag, for non-gamers especially, to figure out that you have to hold Shift+Control+F1 and then left click in order to get your tanks to hold a defensive position. Or hold the left shoulder button, click on the left thumbstick, and then pull the right trigger to fire a sniper rifle. These are complicated maneouvres best left to skilled gamers, and are certain turn-offs for people trying to learn a game.

Which is why I find that games like Civilization or SimCity have a far greater success rate in introducing hardcore gaming to a new audience. It's because turn based titles don't pressurize you to learn them at a forced pace – you can concentrate on improving skills that matter, skills that you're comfortable with. Such as planning, strategizing, problem solving and the like. Without the time pressure, learning the controls becomes simply a means to playing the game, as opposed to being a challenge in itself.

Posted by Anand Ramachandran's Evil Twin at 12:31 AM