Lots of Raj Comics action of late, their web site is amazing : www.rajcomics.com

Do not miss the following, which count among the greatest comics creations ever. Take that, Alan Moore! 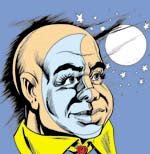 This is Bhanja. Heath Ledger would never have bothered with playing the Joker if he had the chance to play this guy. But maybe Kevin Spacey would have pipped him to the role.

However, don't do yourself the disservice of limiting yourself to these suggestions alone. As you browse the site, you're certain to find other rich treasures and gems to treasure.

Also worth a visit is the Nagraj page on Wikipedia. Some extracts :

Gorakhnath operated & removed the capsule from Nagraj's head setting Nagraj free who became his disciple & vowed to eliminate crime & terror from the Earth. Since then Nagraj has thrice toured the World & defeated many villains & terrorists.

Toured??!!?? I can't help thinking of Nagraj, camera in hand, pointing excitedly at the Eiffel Tower or The Sphinx, while kicking the crap out of baddies in between coach rides. Brilliant! I also love the gratuitous use of the &. 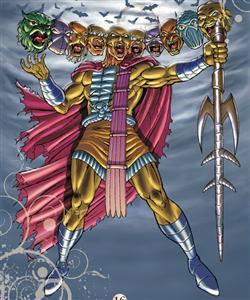 The thin line between horror and comedy. Nobody does it better. The original caption, by the way, says "Nagpasha as Kroorpasha in Nagayana".

It is notable, and perhaps ironic, that Nagraj has now been transformed into a mythical-magical creature facing fantastical creatures as his enemies, with elements of sorcery/magic and even time and space travel. Many cite this as a reason for the continuous , meteoritic rise in popularity of Nagraj Comics. However, purists still claim that they prefer the more realistic, more practical stories that Nagraj began with.