This article first appeared in my Game Invader column for the New Indian Express.

One emotion that games can claim they deliver as well as the movies do is fear.

A very large percentage of the most memorable gaming moments and sequences in my memory are instances where a game has scared me beyond belief.

My favourite recent memory is when I was playing the Ravenholm bit in Half Life 2, lights turned out, volume cranked to the max, soaking in every bit of the very scary atmosphere. Suddenly, I hear a voice call 'Anand'. I shrieked, thinking that Father i, or worse, one of the zombies, had broken through the fourth wall and addressed me in person. The truth, of course, was nothing so fanciful, my wife's Dad had just ambled in to ask me where he could find a glass of water. His deep voice didn't help either. 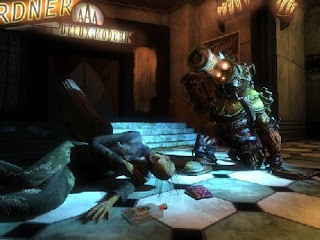 Bioshock's eerie, bloody fun-fair world was one of the finest horror settings in recent gaming memory.

On reflection, it's actually quite a range of frights that games have managed to give us over the years. There's the straightforward darkened rooms-weird noises-horrific creatures kind that we enjoy from Silent Hill or Resident Evil or scores of other action oriented games. There's the more literary kind of thrills delivered by titles like Call of Chthulhu or Planescape : Torment. Bioshock (and it's spiritual predecessor System Shock 2) were delightful horror experiences, delivering a kind of thrill I've not even seen in films. Bioshock, in particular, with its bizarre and colourful fun-fair elements contrasting with the darker, more bloody aspects, managed to create a horror space that will linger long in the memories of those who've played it. 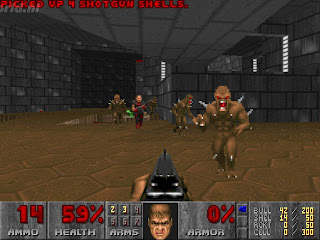 Younger gamers may not believe it, but these are the images that had a generation of gamers peeing in their pants back in the early nineties.

It's natural to think that today's realistic graphics and sound help games be scarier than ever, but let's stop and look at things for a minute. If you can get your hands on a copy of the original Doom (or even look at a few screenshots on the web), you'll likely laugh out loud at the monsters, blood and gore. Yet, these were the same graphics that scared the pants off an entire generation of gamers, who would discuss playing Doom in the same reverential tones that today's gamers discuss Bioshock. Taking it even further, the text-only Zork Adventures had some really tense and frightening moments ( I still remember the troll chasing me from room to room as I desperately looked for a weapon, for anything) and they didn't even have graphics!

In fact, many of the finest horror games were classic adventures such as I Have No Mouth And I Must Scream (the title itself is fairly scary, actually), DarkSeed, and Sanatorium. Though these titles did have good graphics for the time that they came out, it was the writing that made them truly disturbing.

In fact, I believe that audio is even more important than graphics in delivering spine-chilling frights. A recent indie adventure called Penumbra managed to scare me for more than an hour – without anything actually happening, purely by creepy, distant noises interrupting the creepier silence. Most excellent – you must try it if you're on the lookout for something off the beaten path.

Games have a long way to go before they approach the visual and audio quality we get in movies, but, thanks to the interactive nature of the medium, deliver a horror experience that matches, and sometimes even surpasses the motion picture medium.

Is it only a matter of time before developers find a way to match the movies in delivering other emotional experiences as well? A debate for another day.

Posted by Anand Ramachandran's Evil Twin at 1:02 AM