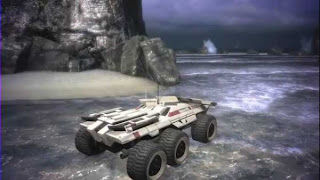 Mass Effect's MAKO. Grrrrrrrrrrr. And no, that's not the engine noise.

If you've driven the MAKO in Bioware's Mass Effect, you're probably aware that it's an annoying, frustrating part of the game that mostly distracts from the core gameplay.

Most of the gamers who played Mass Effect are fans of Bioware and their brand of gripping storytelling, great characters and tense, tactical battles. The last thing they'd want to be doing is driving a crappy-handling armoured vehicle and indulging in pointless rail shooting sequences that interuupt the gameplay they shelled out sixty dollars for. And yet, for some reason, Bioware thought it was a good idea to force them to do exactly that.

Time after time, we see inexplicable features and minigames like this finding their way into the games we love, making us love them a bit less. Jumping puzzles in Half-Life. Monkey Combat in Monkey Island 4.

The excuse usually trotted out is 'genre blending'. Introducing aspects from different genres into a game to give gamers more value for money. Nonsense!

Don't get me wrong, there are games that do just this, and do it brilliantly. The Zelda games have been blending elements of adventure, role-playing and action into a delectable package for years. Games like Shenmue and Sid Meier's Pirates! are also shining examples where gameplay from different genres are used to add to the core gameplay, instead of detracting from it.

However, these are titles where the gameplay has been conceived with genre-blending in mind. It's quite different from shoehorning elements into a game with the misguided intentions of 'adding' something to the experience. Plus, unless you're a Shigeru Myamoto, Sid Meier or Yu Suzuki, it isn't easy.

Let's face it – action gamers want action. Racing gamers want to race. Role-players want story, character development and number-crunching stats. Adventure loyalists want clues and mysteries. That's the reason they spend hard-earned coin on the games that they want to play.
So it's stupid to force features on them that they don't want. Adding silly minigames or tacked-on features don't attract new audiences, but certainly annoy, and ultimately alienate the core market. Whether such suggestions come from ill-informed marketing suits or overambitious game designers is anybody's guess, but it's inarguably a cartload of bovine manure.

Which is why the great designers avoid it. Imagine if Sid Meier had said “Hey guys – let's add a fighting minigame to resolve combat in Civilization IV!”. Or if Bungie had tried to add some puzzle solving into Halo 3. Those great games would certainly have been diminished, not enhanced by such meddling, and the designers probably knew that.

The FPS genre has probably understood this best in recent years. Which is why it's probably the most thriving and vibrant of all – with the most quality titles coming out in the recent past. Games like Half Life 2, Halo 3, Call of Duty 4, and even Bioshock, for all their storytelling skills, are shooters at heart. It's the gunplay that counts, the action that makes gamers rave and crave.
And think about the horrors! Baldur's Gate 3 with platform jumping elements to attract Daxter fans! God of War 3 with a checkers minigame to appeal to board game fans! Forza Motorsport 3 with a lame-ass storyline! The mind shudders with fear.

I'm not against attempting to broaden the scope of games – I just believe it should only be attempted by the most skilled and visionary of designers. Er . . except Peter Molyneux, that is.
Posted by Anand Ramachandran's Evil Twin at 8:41 AM