Why I support the Indian team.

“Why do you support the Indian team? They ALWAYS lose. They’re USELESS.” Okay, how many of you have heard THAT one recently? I’ve heard it several times. So has Aravind Murali. So has Vishvanathan Srinivasan. So has Tony Chacko. Mostly from people who have no problem joining the party when the boys win.

Our answer? Because it’s OUR team, you morons! O-U-R team. India. The men in blue.

We don't support this team because it's the best team in the world. Or because it's filled with good looking hunks. Or opening batsmen. Or great scientists. Or whatever.

We support this team because they play for India. And, in case you haven't noticed, we're Indians. 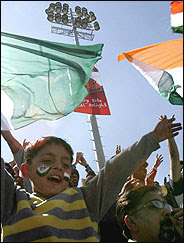 Stay with it, little one. Stay with it. Don't let them tell you any different.

I'm no apologist for the team. I think our approach to fielding is woefully hopeless. I agree that our bowlers and batsmen are too indisciplined, too inconsistent, to provide us with anything more than patches of brilliance (but WHAT brilliance!). And no, I don't think we're going to win the world cup.

So, what do you want me to do? Paint my face yellow and support Australia? Sounds ridiculous? Exactly.

It’s all about loyalty, you superficial palookas. That’s why people support Atletico Bilbao. Or Charlton Athletic. Or Tim Henman. Or England. Or India. Loss after loss after heartbreaking loss. That’s what real supporters do. That’s what makes them different from fair-weather fans who will guzzle the bubbly during the good times, and change the channel during the bad.

Yes, we'll castigate the selectors. We'll say that Suresh Raina needs a kick up the backside. We'll dream of throwing the fast bowlers off a plane. We'll crucify the captain and make plans to assassinate the coach.

But when the game begins, we'll be there. When a single wicket falls, we'll dream of an impossible recovery. When a tailender finds the boundary, we'll start hoping for cricket miracles. We'll believe in our hearts what we can never conceive with our minds.

Because that's what we do, us cricket fans.

That's why none of you outsiders will ever know the sweetness we feel when India wins. I hope you're happy waiting for The DaVinci Code 2, or the next Shah Rukh blockbuster, or whatever. Because we have a world cup to look forward to.

P.S. - I lost a large number of posts due to some technical issue with wordpress. This article is a reconstruction - and may differ slightly from the original. Also, all the comments were lost, so I'm putting them all up in one lot. Thanks for visiting.

Posted by Anand Ramachandran's Evil Twin at 10:53 AM

Email ThisBlogThis!Share to TwitterShare to FacebookShare to Pinterest
Labels: sports