The Alien has landed.

The world's most powerful gaming laptop comes to India.

by Anand Ramachandran. This article first appeared in Gadgets and Gizmos magazine. 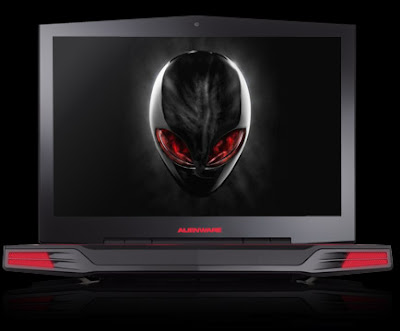 Alienware. The mere mention of the name is enough to draw gasps of admiration, looks of envy, whoops of delight and other extreme reactions from gamers worldwide. Since 1996, the Alienware brand has been synonymous with top-of-the-line PC gaming all over the world. If you weren't playing on Alienware, you weren't a part of gaming's elite, the select few who could experience PC gaming in all its high-resolution, light blooming, anti-aliased glory.

In 2006, PC manufacturing major Dell bought the Florida based company, and made Alienware their premier gaming line, replacing their own XPS range. Three years later, the M17x, the 'most powerful gaming laptop in the universe' was launched as the first Dell-Alienware branded product. It was the ultimate in indulgence – a laptop that destroyed most desktops in terms of sheer gaming firepower. A rich kids' toy. A needlessly expensive and excessive white elephant. The hummer among laptops. Which is why everyone, openly or secretly, wanted one. It was the sexiest thing ever.

And now, it's in India. And we got a chance to take it for a spin, lucky us. Here's what we found. 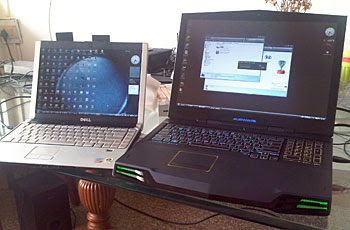 The Alienware M17x absolutely dwarfs my beloved Dell XPS M1330. It's a behemoth in every possible way.

One look at the M17x, and even the casual observer will instantly know that this is no ordinary laptop. In fact, calling it a laptop is a little misleading. Unless you're Dolph Lundgren (or at least Sunjay Dutt), there's no way you can keep this 5.5 kg monster on your lap for anything more than a few minutes. This is firmly in 'desktop replacement' category. It's also fairly massive – measuring 16 inches by 12.5 inches, with a thickness of two whole inches. It's big and intimidating and will get you envious stares. Guaranteed sex appeal max (in a male way, though). 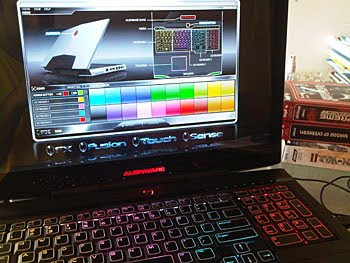 Don't like the eighties Kamal hassan movie disco colours? A few tweaks in the control panel , and . . . 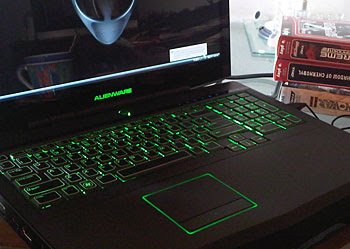 The anodized aluminium exterior, in sleek, shiny black (silver is also an option) contrasts almost eerily with the glowing backlit keyboard, front and sides. And of course, the famous alien-head logo on the top cover. This thing comes with a software control panel that lets you pick the glow colours for each individual part of the laptop. It's insanely cool. But it's not that important. What's important is . . .

What's under the hood

Make no mistake – this laptop packs some serious hardware. Our review piece was running on Intel Core2 Quad Q900 with a 6MB Cache and a 1066MHz FSB, but you could also go with the Core2 Extreme Quad for even greater power. We had 4GB of DDR3 (optional 8GB available) and a 320 GB HDD at 7200 rpm. As you may have guessed by now, it's nicely set up for some deliciously extreme gaming. Now, if only there was a half-decent graphics card.

Too bad the graphics capability on this is disappointing. Heh – gotcha! Jokes aside, the M17x packs nothing short of the most awesome graphics ever seen on a laptop, period. Our review piece was running dual nVidia GeForce GTX 260 1 GB GDDR3 cards on SLI, but the true hardcore can upgrade to the GTX 280. You can wipe your drool off the page now, and continue reading.

The M17x actually has an integrated 9400M graphics chip that you can switch to when doing wimpy things like surfing the net or looking at pictures of your loved ones, to save power. Folks, the integrated graphics card on this machine is better than that you find on most laptops today. It's THAT awesome.

All this graphics muscle comes to life on the brilliant 17-inch Wide UXGA 1920 x 1200 display. It's pretty much a visual treat. Our advice? Don't waste this on kid stuff you can do on wimpier laptops, such as watching movies or working on Photoshop. This is a rig for gamers. Nuff said. And, speaking of which . . .

Okay, here's the part of the review that most of you probably skipped to. It runs Crysis at almost maxed-out detail and anti-aliasing, at 1680 by 1050, at 60 fps. So you can stop reading now. 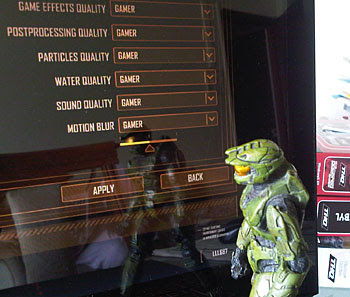 Master Chief admires the settings at which the M17x can run Crysis, and turns green with envy. What's that? He was already green? Oh.

Or you can choose to continue and learn that we also tested Dawn of War 2, Supreme Commander and STALKER. All these games ran on full detail at 1920 by 1200, without breaking a sweat. The RTS titles, when zoomed in, look like battle scenes from animation films. It's truly jaw-dropping stuff. In fact, after a few hours with the M17x, my PS3 games started looking like Nintendo64 titles. 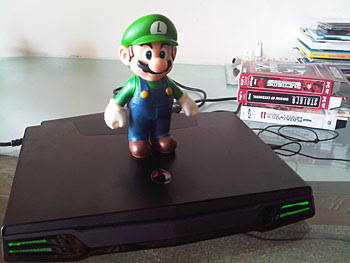 After trying unsuccessfully to stomp on the M17x like a Koopa Troopa . . . 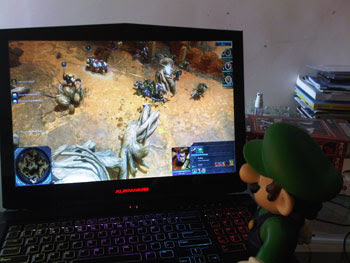 . . . Mario decides to take in the awesome splendour of Dawn of War 2 on full detail.

With lower-end and mid-range machines, it would make sense to go into great detail over gaming performance – discussing options, frame rates and resolutions, but with the M17x there's really no point. It will run all your games maxed out, at least for another two or three years. Simple. Now run along and play. We're done with this part.

Okay, I got so excited about the core stuff that I almost forgot that the laptop has a slot-loading Blu-Ray combo drive, HDMI and video out, four hi-speed USB ports, an eSATA port, separate subwoofer and central speaker audio jacks, and a rear surround audio out port. The two built-in speakers on the front side deliver more than adequate sound for a laptop, but you're going to want to hook up a surround system or hi-end headphones for your gaming fix. The integrated Gigabit Ethernet RJ-45 (1000 Mbps) and high speed MIMO capable WLAN make it sweet for multiplayer as well.

Is it all good then ?

All that power means that your battery life is much lower than what you'd expect from a laptop. We got about two and a half hours from the 9-cell Lithium Ion battery in power-saver mode, running integrated graphics and performing regular non-gaming tasks. But in high-performance mode playing games, it drained out in a little over half an hour. But the point is mostly moot, since this heavyweight laptop isn't something you're really going to be lugging around on a daily basis. Portable, but not mobile, as they say.

Oh – and it runs Windows Vista (you can choose your flavour, but we recommend Ultimate) , which isn't everyone's favourite OS, but is pretty much the only viable one for gamers.

The Alienware M17x is unquestionably a luxury product. It's not something you buy for value (you could build a comparable desktop for less than half the price) , it's something you buy for sheer indulgence. It's that sexy SUV that you know you can't afford (unless your name is Ambani) but are sorely tempted to save up for and buy just to impress the ladies.

If you're looking for the ultimate gaming experience on a laptop, and don't mind dropping Rs. 1.38 lakhs or more, look no further. The rest of us can hope that Dell introduces the Alienware desktops in India sooner than later.

Posted by Anand Ramachandran's Evil Twin at 2:03 AM