Monster Hunting - not for the meek.

by Anand Ramachandran. This article first appeared on my weekly 'Game Invader' column for The New Indian Express.

Every so often, there comes along a game so lovingly, unabashedly hardcore that it reminds us of why videogames have managed to attract such a devoted, almost tribe-like fan following.

Monster Hunter : Freedom Unite on the PSP is one such game. While the gameplay is merely a polished, slightly improved version of its predecessors, this is the first release officially available in India. And for the hardcore set, this game alone is reason to get a PSP.

While most games today mollycoddle new players by offering tutorials that ease the learning curve, and difficulty levels that make failure near impossible, Monster Hunter : FU lives up to its abbreviated name by being so unforgivingly deep and difficult from the word go, that it seems to mock your feeble efforts at playing it. Sure, it has a superb tutorial that explains every facet of the game – but the tutorial itself will take over two hours to complete. 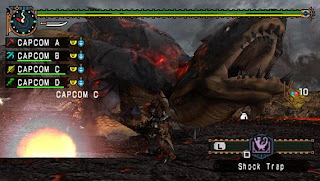 You'll go up against some baaaaaad monsters in this game.

Monster Hunter : FU is essentially an action / role-playing game in which you must protect a village by hunting down different kinds of monsters that roam the surrounding countryside. While this may sound like a regulation formula, nothing could be further from the truth. Hunting a monster in this game doesn't mean running brazenly into the forests, slashing the beast into ribbons, and hurrying back for a reward. You'll have to prepare carefully for each hunt – meticulously choosing your equipment and strategies depending on the weather, terrain and nature of the beast. Wander off into the snowy mountains without the proper warm clothing and hot drinks, and the frost will kill you even before you face your first monster battle. Forget to carry enough food, and you'll be so weak from trekking, climbing and running through rugged terrain the monsters will likely die laughing before you even scratch them. Trying to hunt down a flying monster armed only with a great-sword? Bad idea. 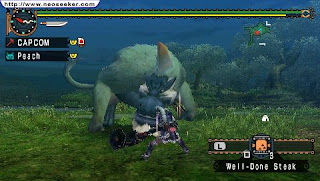 If you think you'll take this guy down by button-mashing, you'll be dead before you hit 'X'

The sheer number of things to do in the game is bound to delight RPG purists. Monster hunting, naturally, is incredibly varied and satisfying. Apart from a range of melee and ranged weapons, you can choose from a variety of traps, thrown weapons, bombs and the like to lure monsters, track them, conceal your approach and evolve unique strategies for each hunt.

Apart from this, there's a weapon, armour and item crafting system where you can use materials gathered from the wilderness to improve your equipment, create potions and suchlike. Gathering stuff in itself is deep and detailed – you can pick herbs and flowers, catch insects with a bugnet, catch fish, and carve items such as bones and meat from killed monsters. You can grow your own ingredients on your farm.You can cut precious gemstones from veins that you find on rock-faces in the mountains. You can cook a steak if you need food on a long and lonely hunt. And yes, you can burn it if you're not careful. 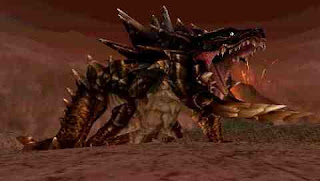 I haven't come across this guy yet, but when I do, I'll probably quit and get back to playing 'Rock Band Unplugged'. Mummy!

Sadly, there's no online multiplayer, so you'll need a friend with a PSP to play the ad-hoc coop mode – but it's worth it. The team hunts are great fun, and the only way to take down some of the tougher beasts in the game. Make sure you play with headphones for a vastly improved experience.

Monster Hunter : FU successfully delivers the thrill of the hunt on the PSP's tiny screen. This is a game that almost dares you to play it – but rewards the hardcore like few other games do. Easily among the best handheld action RPGs available today.

Posted by Anand Ramachandran's Evil Twin at 5:54 AM