A review of the N-Gage version of Monopoly Here and Now : World Edition, which first appeared on my weekly Game Invader column for The New Indian Express.

One of my personal favourite gaming moments over the past few months came not on the PC or a heavyweight console, but on my mobile phone.

During a long wait at a bank (due to some procedural screw ups they seem to be so good at coming up with), I randomly decided to fire up a MONOPOLY HERE AND NOW : WORLD EDITION game on my N81. The game is an N-Gage port of the perennial board-game favourite, and I expected that it would help me pass a few minutes while I checked it out. 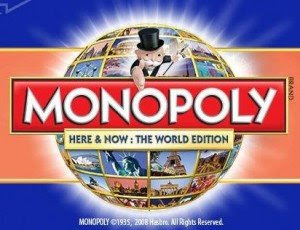 Monopoly Here and Now : World Edition is clumsily named, but surprisingly addictive and boatloads of fun.

But before I knew it, I was completely hooked, wheeling and dealing with the AI opponent with so much fervour, I almost missed my turn to meet the manager when it eventually came. An hour and a half had passed, and I was none the wiser.

The N-Gage version of Monopoly is a lovingly created, faithful translation that is sure to please fans of the board game. Within minutes, you'll be planning your empire, deciding buying strategies, improving and mortgaging properties, praying that the dice will roll up a favoured number, drawing Chance cards, and of course, making a few trips to Jail. Once you get past the very mild learning curve, which mainly involves understanding the controls and menus, you'll be enjoying an honest-to-goodness game of Monopoly. 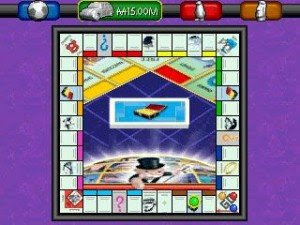 In time, you'll grow to hate your AI opponent as much as you normally hate real-life monopoly opponents! Pity there's no cheating.

The AI is surprisingly decent – especially when trading with. Your opponent will accept or reject your offers to trade properties, come up with offers and counter offers of its own, and generally behave on the same irritating, hate-inducing way that most real-worl Monopoly opponents do. There's something about the game which makes normal, perfectly likeable people turn into stubborn, unreasonable, ruthless unspeakables. Brilliant stuff – the kind of appeal that makes for great games.

Playing Monopoly on my phone was a surprisingly complete and authentic Monopoly-playing experience that included almost every single aspect of the board game's fun factor – with the possible exception of cheating, which is one of the things purists will miss! 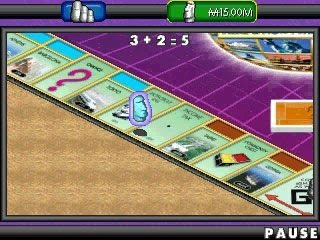 Monopoly Here and Now isn't a graphical powerhouse, but does feature some serviceable animation and fairly snappy presentation overall.

You'll spend many enjoyable hours poring over your title deeds, making offers and counter offers, and hoping for the favourable luck that will help you string together properties, build on them, and decimate your opponents into bankruptcy.

If you have an N-Gage compatible device, this is a must-buy game. And I'm pretty sure thare may be other mobile versions of it as well, so all you Monopoly faithfuls, give it a shot. Much joy to be had.

Monopoly is a classic example of how to tap into the delectable combination of classic gaming experiences and mobile phone technology to recapture the magic of old favourite board and card games for new audiences, as well as those like myself who rediscover these games. A huge advantage is that these are all already proven, polished and successful game designs – as long as the port is well done, you have a definite winner. It's a shame then, that so many of the ports are so badly or lazily done.

The excellent UNO and the upcoming UNO Rush, Carcasonne and Settlers of Catan on XBOX Live are also testimony to the good sense of well-made ports of existing classic game designs. People love playing these games, so developers, can we have more of these please? They're relatively cheap to make, and are almost sure-fire hits.

Now, if you'll excuse me, I need to roll a double, so I won't have to use my 'get out of jail free' card.

Posted by Anand Ramachandran's Evil Twin at 6:08 AM