Killzone 2 – Should you believe the hype?

First, let's get this out of the way. Killzone 2 is the best looking console shooter of all-time. It's a frenetic, furious and intense FPS that is far and away the best PS3 shooter, and one of the best games available on the platform. It's taken a weak franchise and made it a force to reckon with in the highly competitive genre.

But is it a game-changer? Is it a hall of famer? Will it be remembered fondly ten (or even four) years from now?

When I recently suggested that DOOM was the most important FPS ever, a lot of my knowledgeable friends responded with the inevitable Wolfenstein 3D argument. Wolf predated DOOM. No Wolf, no DOOM.

I find it hard to disagree. Wolf was the single, one game that made me fall in love with gaming, and see the mind-boggling potential of the first-person viewpoint. Within minutes of playing Wolf, my head was spinning with mad, wild love. This WAS the coolest thing of all time. 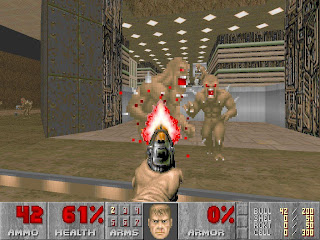 In my opinion, DOOM is the single most important FPS ever made. Disagree? Argue with THESE guys.

But DOOM took the baton from Wolfenstein 3D and raised the bar it to a different level. It was the Usain Bolt powered anchor leg to Wolf's already impressive first three, but that's what gets all the great press. Wolf was exciting, DOOM was piss-in-your-pants scary. Wolf looked brilliant, DOOM was photorealistic, back in the day. Darker, more violent, and in every way a more definitive experience, DOOM is what made the FPS hardcore gaming's dominant genre.

Many also forget that DOOM introduced network play to the FPS. Up to eight players, over LAN, could shoot each other in the face until 3 a.m. Ever heard the term 'Deathmatch' ? It was invented by DOOM. DOOM was also the first FPS to be moddable, giving users the power to create their own levels. Has there been a more important game?

Half-Life and its evil twin Counter-Strike are next in the ladder. Half-Life is the definitive modern FPS, showing how shooters could be so much more than glorified duck-shooting galleries. More than any other game, Half-Life delivered the experience of starring in your own action movie, something that every action game today tries to emulate. Today's design convention of never exiting the game engine, was first demonstrated by Half-Life, the first game in my memory never to break your suspension of disbelief, not even for a single moment. No cut scenes. No loading screens. Nada. A stellar work of art.

Counter-Strike, for showing the world how much fun multiplayer shooters could be, and making multiplayer an essential component of FPS design. And for creating millions of fanboys who love it so much, they refuse to even consider playing anything else. 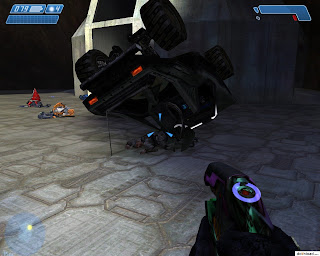 Halo showed the world how FPS could be done right on a console, and established several genre conventions that are followed to this day.

Halo, for showing that FPS could be done right on a console, and launching a billion-dollar industry. Halo was responsible for single-handedly raising the profile of consoles in the eyes of the hardcore, and showing the world that consoles weren't only for kids, the casual set and Japanese adults. With XBOX Live, Halo was the first title to establish the ground rules for online multiplayer on consoles. Along with its sequels, Halo continues to be the finest online multiplayer experience in console gaming, breaking new ground so other titles could follow.

So our answer to the Killzone question is a resounding 'Nope'. It's quite simply an amazing game that is a must for every modern gamer, but it stands on the shoulders of giants.