The Sad Thing ABout FXlabs' Agni 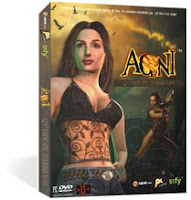 There's been much ado over FXLabs' recent release, Agni.

You can get all the intel by following the links from the Angry Pixel, right here. There's another interesting article up on Good Gamer, Bad Gamer. Of course, the now-famous Mumbai Mirror review. And here's Sumit Mehra looking at it with a developer's keen eye.

Now, I think Agni is a terrific development for Indian gaming in so many ways. I really do.

We all know how hard it is to get a game, any game, out to market. So well done, FXlabs, for taking the lead, and having the courage and perseverance to bring Agni through to completion. Kudos for taking a bunch of developers through a valuable learning curve, so that they will go on to make better games in the future. Huzzah for putting in place processes and all that jazz so that an Indian development house can handle every aspect of game development, from concept to retail.

But then, you just HAD to go and blow it.

If, upon the release of Agni, the folks from FxLabs could have stepped up to the micropohone, and said something along the following lines :

“Fxlabs is proud to be a part of this landmark event for Indian game development. We understand that there's a long way to go, but we're proud of the fact that we've delivered a complete game to market, and established the way forward for Indian game developers. We are delighted to have played the role of the pioneer, which we realize has its pitfalls. But this is all part of a learning curve, and we promise to get better with every release. Look forward to better games from us in the future.”

But no. Almost everyone involved made a bunch of statements so far-fetched, so ridiculous, that it boggles the mind. Some samplings :

Sashi Reddy, founder and chairman of FXLabs: “Agni is the result of our efforts to offer Indian gamers with international quality content with local flavor at Indian prices. We have followed international ‘AAA’ production standard that rivals the best PC games in quality.”

Arun Mehra,chief marketing officer at Zapak : “When we saw the Agni game by FXLabs, we were very excited as this is probably one of the first Indian games that will stand up to international standards.”

CVS Suri,chief operating officer of Sify Technologies : “The first world-class game developed in India, Agni has Indian characters with compelling content and local flavor that can capture the imagination of the gaming community.”

Do these guys even play the current generation PC games? I guess not.

Way to go, guys. Instead of rightfully claiming due credit for what is a significant achievement, you go and look foolish by making statements that, besides being hopelessly inacurate, actually do you the disservice of highlighting your weaknesses. Comparing Agni to 'the best PC games' such as Bioshock, COD4, and Oblivion cannot serve any purpose other than to make the game look far worse than it actually is.

I honestly believe that efforts like Agni are crucial milestones that need to be passed for the game development industry in India to mature. But the people involved surely must understand that it's not about the quality – it's about the learnings, the experience, and the incalculable value of having a release under your belt. It's about pledging to keep on getting better, and following through on that promise. If that honesty is apparent, then I believe that the gaming community will surely back you up, and support even crap games until you eventually get there.

But to insist that Agni is world class is either foolish, or pretentious. I so hope that it's the former.

Posted by Anand Ramachandran's Evil Twin at 10:38 AM