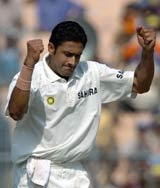 Amidst all the frustration and sadness, let's stop a minute to say goodbye to a man named Anil Kumble.

A man who, through it all, remained one of the most dignified, committed and skilled cricketers to play for the Indian ODI team. Ever. Much has been said about Kumble the cricketer. Like here. And here.

A man who never lost his cool, never argued a bad decision, never blamed bad performances on this or that, never once set a bad example on the field or off it. A man whose name was never dragged through the mud. In present-day Indian cricket, that makes him the rarest of the rare.

A man who enriched our game simply by being a part of it.

Email ThisBlogThis!Share to TwitterShare to FacebookShare to Pinterest
Labels: sports