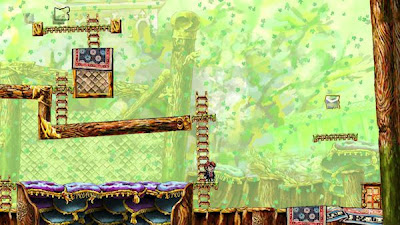 Few games, from any generation, on any platform, have ever appeared as simple yet worked on as many different levels as Braid does. For instance, my favourite Braid moment didn’t even happen when I was playing, or have anything to do with what was happening in the game itself. Watching someone else play for the first time, I found myself gently chuckling as he went through his repertoire of standard gaming responses - time that jump just a bit better, take a longer run, explore a different area of the screen, look for power ups – before it slowly dawned on him that maybe, just maybe, that rewind mechanic in the game was there as something more than a fancy replacement for a save/retry option. From there, it was a few short steps before he started to understand why the story was written as it was, the correlation between the intro screens and the game mechanic. As I watched, I was reflecting on how so many of our responses as we go about our lives are so conditioned, so predetermined.

That’s right, watching someone else play, I was thinking about how I go about my life. That’s the kind of experience that Braid is. Or isn’t. Take your pick. It’s a challenging puzzle-platformer, a ground breaking experiment in videogame mechanics, a beautiful work of art, a brilliantly written story of unrequited love, a commentary on the creation of the atomic bomb, and a thought provoking documentation of a young man’s journey through life. Braid can be any or all of the above, all delivered through lovingly crafted visuals set against haunting, melodic music, liberally sprinkled with subtle, reverent nods to classics of platforming like Super Mario Bros and Donkey Kong. And all of this is capped off by probably the best ending level ever, with an honest to goodness twist ending – which in itself, tales a little time to really sink in. It really has something to reward anyone who has even an iota of the patience needed to absorb it. With no “tutorial”, and the largely respected plea from the developers not to put walkthroughs up on the net, you will need patience. And will be well rewarded for it.

Play through from start to finish before challenging yourself with the speed runs and maxing out your achievements, sit back and gaze upon the paintings you create by finishing each level, or trawl the internet figuring out what it all means. It doesn’t really matter how you experience Braid, but experience it, you must. In the twitch dependent, photorealism craving, mega budget marketing dominated world of videogames, Braid is a simple, purely movement and jump control driven, independently developed game that requires, no, demands, that you put down your controller every so often and think, reflect and contemplate. And in today’s world of instant gratification, that certainly deserves an award.
Posted by Anand Ramachandran's Evil Twin at 2:24 AM