Bioware's long-awaited 'spiritual sequel to Baldur's Gate 2' married old-school hardcore role-playing and tactical combat with new-age technical wizardry to deliver the most complete party-based fantasy role-playing game of all time. It's epic, sweeping storyline, great characters and classical RPG elements may just have ensured that Ferelden takes its place as one of gaming's premier RPG realms. Look for an MMO in about five years. 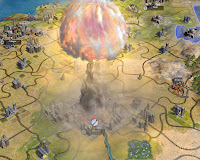 Sid Meier's flagship franchise shows no sign of slowing down. Civ 4 somehow managed to be more addictive than its predecessors (if that's even possible) – so addictive, we played it for 27 hours in a single day. It incorporated features like Religion to the core game mechanics, and speeded up the mid-game – the weakest part of Civilization 3. The best looking Civilization game ever, this is a game we still can't stop playing. Until Civ 5 eventually comes along, hopefully.

Just when Fighting Games were fast becoming fancy-pants 3-D borefests that seemed to be hopelessly floundering in the search for graphic superiority and stupid, controller-defying combo systems, along came Street Fighter IV. It opened up a can of old-school Whoop-Ass, and kicked every other game into morrow . . er . . oblivion. Effortlessly balancing hardcoreness with accessibility, SF IV is suddenly the premier fighting franchise yet again.

Fallout fans were almost in permanent mourning over the fate of their favourite franchise (remember Van Buren?) when they found an unexpected saviour in Bethesda Softworks. The studio behind the Elder Scrolls games took the Oblivion engine, slapped in a generous helping of classic Fallout universe ingredients, added some soulful tunes by Danny Kaye, Billie Holiday, Ella Fitzgerald and the like – and whipped up one magical game, one of the best of all time. And you could shoot mutants to bits - limb by limb. 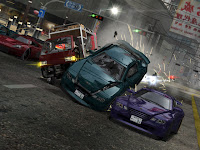 Burnout 3 : Takedown practically reinvented the arcade racing genre which was lumbering under the weight of the bloated, wayward and unpredictable Need for Speed franchise. Burnout took all pretensions of being realisticic and tossed them out the window – setting the standards for over-the-top physics, a blazing sense of speed, and spectacular crashes. Here was a game you could finally win by crashing into other cars and the track at breakneck speed – the n00bs loved it, and the hardcore loved it and a juggernaut franchise was born. 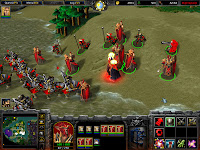 Blizzard redefines every genre they make games for, every few years. Warcraft 2, along with Command and Conquer, took the RTS genre mainstream. With Warcraft 3, Blizzard destroyed Westwood by taking things so far ahead, it took the C and C franchise many years to catch up. Eye-popping graphics, superb, diverse races, role-playing elements seamlessly woven into RTS gameplay and a story that was told using some of the best cinematics gaming has ever seen. It was Warcraft 3 that paved the way for World of Warcraft, which is reason enough for it to be a hall-of-famer. But Warcraft 3 doesn't need that crutch – it's one of the greatest games ever made.

You play as a world-famous Italian plumber who leaps from planet to planet, picking up bits of stars, defying gravity, stomping Koopa-Troopas and Goombas, dodging Bullet Bills, rescuing a princess and making sure that gamers all over the world had their pulses racing. It has explosions, Bowser, wonderfulbrillastic graphics, and one of the strangest, most beautiful musical scores to grace a videogame. Super Mario Galaxy is to Super Mario 64 what Super Mario 64 was to Super Mario World. This paragraph will now self-destruct due to awesomeness overload. Boom.

Roger Ebert prattles on that videogames can never be art. Shigeru Miyamoto makes games that make Roger Ebert look like an idiot. Metroid Prime was a stunningly beautiful first-person adventure featuring the classic Samus Aran bounty-hunting, puzzle solving, boss-battling gameplay set in a hauntingly beautiful 3D world – and proved that first-person games could be successful without purely focusing on gunplay. And you shoot doors to open them. Even Duke Nukem didn't have to be that awesome.

A role-playing adventure disguised as an FPS, Warren Spector's classic arrived in the wake of Half-Life, but managed to hold its own despite being in the perpetual shadow of Gordon Freeman's happy days at Black Mesa. It had an engrossing, conspiracy based storyline, amazing characters, and deep character customization that truly enabled you to play as you liked – all guns-blazing or stealthily. Ideas from Deus Ex are being copied in games to this day – and I'm not talking about black trench-coats and cooling-glasses.

A descendant of all-time classics such as Deus Ex and System Shock 2, it would have been easy for Bioshock to have slipped into derivative mediocrity. Luckily for us, Ken Levine and his team at Irrational Games took those features and supercharged them with incredible next-gen production values and creative treatment that would shame most Hollywood movies – and created one of the most beautiful, frightening and unforgettable gaming experiences in history. Bioshock's storytelling made sure that it ws one of the most emotionally resonant games ever made, and Rapture remains one of the most fascinating gameworlds of all time.
Posted by Anand Ramachandran's Evil Twin at 6:41 AM