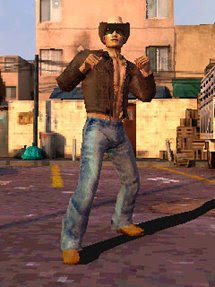 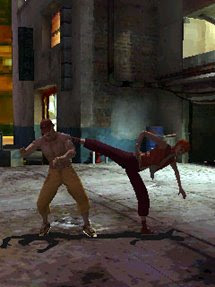 Barry Horowitz : No variety in fighters, moves. May not appeal to hardcore fighting fans. No online play.

One is the sequel to the 3D fighter that appeared on the original N-gage. That game appeared too late to save Nokia's much-maligned platform, but was universally recognized as a great looking game that truly showed-off the N-gage's potential.

This one is better in every way.

The first thing that stands out about One is the 3D visuals. My friends, without exception, have marvelled at the outstanding graphics - without parallel on a mobile phone. The environments, player models, animations all combine beautifully towards making One a title that looks almost as good as early generation PSP games.

Which would be useless without great action, but thankfully One delivers that as well. It's a solid, if unspectacular, fighting system that rewards tactical, skilful fighting over frenzied button-mashing. And, in my book, that's the mark of a good fighting game.

At first look, One's fighting system looks bland and unexciting. Every fighter is exactly the same - except for cosmetic changes (you can customize your fighter with a variety of clothes, accessories, hairstyles etc.). There are only two 'styles', which give your fighter two sets of moves - so basically every fighter is an instance of one of these two templates. There are no special moves for each fighter, or super-combo systems, or any of the stuff found in more hardcore fighting games like Mortal Kombat or Soul Calibur. People who are looking for a large roster of varied fighters with unique moves, combos and specials, you won't find any of that in One.

But what you will find is a simple, yet challenging fighting system that, since it eliminates the differences granted by varied characters, boils it down to who is the more skilled fighter. Hardcore players who have gone through the practice of choosing the same fighter (Mitsurugi vs. Mitsurugi) to level the playing field will instantly recognize and appreciate this. And you will need to be skilful to master the fighting system of One - it may be simple, but it's not easy by any means.

There's a story mode that pits you against a variety of fighters from locations all over the world. Beating opponents in story mode unlocks them for play in the Versus mode. There's also a standard survival mode. In all, enough to keep you occupied endlessly if you enjoy fighting.

One also uses the oldest trick in the videogame book to keep you invested - the good old high-scores system. It does this by including a chess-like ELO rating system, which keeps track of all your victories and defeats - awarding and deducting ELO rating points from your score. You can then upload your scores to N-Gage Arena, and compare your standing against other fighters from your country, continent, or the world. However, this doesn't quite compensate for the lack of online play, which is a disappointment considering the N-Gage is being pushed as a community gaming experience.

One isn't a Street Fighter / Mortal Kombat / Virtua Fighter kind of traditional fighter with crazily overpowered fighters, insane moves, and grotesque violence. What is is, is a realistic, skill-based brawler that offers hours of fun for those willing to get into it and master the fighting system. And, it's a great way to show off your NSeries phone.
Posted by Anand Ramachandran's Evil Twin at 7:37 AM