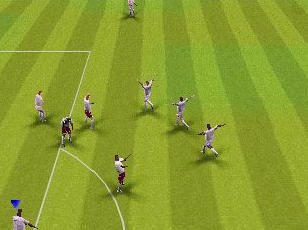 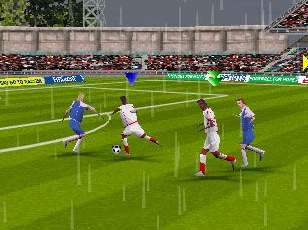 Good from far, far from good. FIFA 09's player models look fine from a distance, but oddly blocky when zoomed in.

FIFA 09 is the new king of football games on consoles – the XBOX 360, PS3 and PSP versions have gained universal acclaim for great gameplay, amazing presentation, and the usual slew of great features found in the FIFA franchise. The gameplay has forced even hardcore PES loyalists like myself to admit that, in many ways, EA has finally wrested the crown from Konami.

However, I'm sorry to report that the N-Gage version is quite rubbish.

I wanted to like it. I'm a believer in N-gage, as is known to regular readers of this blog. I want the platform to succeed, I want it to have great games. Bu FIFA 09 does the platform a grave injustice – it's one of the high profile releases, and could have propelled the platform to greater levels of acceptance. But it sucks.

The essence of a footy game is fluid, responsive gameplay. By responsive, I mean that the players you control should do the things you want them to do. You press the pass button, they should pass to the player in the direction you point. You press 'switch player' the control should switch to the player logically nearest the action. FIFA 09 on N-Gage doesn't even get the basics right, making for frustrating, annoying gameplay that will make you want to throw down your phone in anger.

I picked Italy and played against China on the default difficulty level. My players kept passing to the wrong guy. The AI defenders would just stand still and let the opposing forwards waltz right through. I'd be frantically hitting the 'switch player' button and hope, ususally in vain, that I'd get control of the right player. China 2 , Italy 0.

FIFA 09 features a simplified control scheme that uses just the d-pad and the two gaming keys (I played on an N81 in landscape). Which is great in theory – but the problem is, it doesn't work. It's unresponsive and erratic, making the gameplay more of a blind, button-mashing lottery than a precise game of flowing football. I have nothing against simple control schemes – PES 2008 mobile uses a single-button scheme that works perfectly well. Even the PSP version of FIFA 09 offers a simplified control scheme that's fluid, and a pleasure to play for casual or new players. But this one's a total mess.

The AI is broken as well. Players run around aimlessly, or stand still. Defenders will stand by and let opposing forwards run past them. Players will run back and forth near the ball without picking it up. While it's possible to eventually gain some semblance of accuracy when attacking, defending is a complete nightmare. All in all, FIFA 09 is a chore to play.

Which is a great pity, since it otherwise packs so much content and so many ideas. There are several game modes – including the leagues, tournaments and scenario based challenges from its console counterparts. As usual, there's an excellent roster of teams and players to choose from, albeit not quite as expansive as the console versions. But it still features pretty much any team you'd want to play as.

It features a fairly decent range of strategies – formations, player attributes – but these are pointless when the basic gameplay isn't up to scratch, so there's no sense in dwelling on them.

The graphics are also spotty – while the presentation is great overall, the player models look strangely blocky when close-up. From the evidence from other titles like One and System Rush, it's probably fair to assume that the N-Gage is capable of handling better graphics, so I'll count this as a problem. They look fine when zoomed out, but if you zoom the camera too far away, the system struggles to keep up when drawing more polygons / sprites on screen, and slows the gameplay to below-acceptable levels.

Also - there's no muliplayer, which is understandable since the game barely manages to chug along on single-player, so online play may have reduced it to slideshow levels. There are some rankings and the like - but I honestly didn't pay much attention to these, annoyed as I was with the basic gameplay.

I've been playing football games as long as I can remember, beginning with Pele's Soccer and Realsports Soccer on the ATARI 2600, through Sensible Soccer on the SEGA genesis, to Kick-Off and early iterations of FIFA and Virtua Soccer on the PC. I've played every version of FIFA and Pro Evolution Soccer for the past five years or so. I've even played the Java versions of PES and Real Football on the mobile phone. It's fair to say that I love my footy (haven't missed much since 1982), and I'm reasonably well qualified to comment on the quality of football games.

Hence, I'm sorry to say that I can't remember the last time a football game disappointed me as much as FIFA 09 on the N-Gage. Sorry EA, this one's a red card offense

Posted by Anand Ramachandran's Evil Twin at 5:40 AM