Can a Role Playing Game be a mirror of your soul ?

I used to find it difficult to kill innocent people, you know.

One of my earliest memories of having a profound gaming moment is of trying to kill a random NPC farmer in the original Fallout. I wanted to try Fallout's famous freedom of choice, where the world and storyline would adapt to choices you make (really adapt, not Peter Molyneux adapt) , so I just walked up this character going about his life and shot him in the kneecaps (V.A.T.S. is so much fun).

His response was game design genius. He immediately pleaded "Please! I have children! " It shook me. I reloaded a previous save, and left him alone.

A simple pre-programmed response from an NPC made me think deeply about myself. And I realized that, even in make-believe world of role playing games, I couldn't willingly hurt innocent people.

What followed was about twenty years of playing RPGs as a paragon of virtue. Ever the hero with a heart of gold. I would always take the "good" choice. Bend over backwards to make sure everything in the world was just peachy, doing sundry side quests that involved rescuing lost sons and daughters, brokering peace between warring factions to avoid senseless violence, refusing monetary rewards for helping poor farmers (of course, the XP was admittedly more useful) and so on.

Some of my favourite gaming moments from RPGs are the emotional payoffs from undertaking arduous and long, though entirely optional, quests just to do the right thing. Helping the ghouls by rrepairing the reactor in Gecko in Fallout 2. Taking the long trek the temple of Ilmater to purify Yoshimos heart and set his soul at rest in Baldur's Gate 2. Sharing a drink and chat with Letho at the end of The Witcher 2, simply because I was tired of all the bloodshed and wanted to avoid any more. All fantastic emotional moments.

Even if this meant forgoing all the cool stuff you got if you played as an evil character (lots of insane powers, equipment and loot in many RPGs is available only to evil characters), I still couldn't bring myself to make evil choices in games.

And then something interesting happened.

Today, I am far more ambivalent towards the ideas of good and evil. I increasingly believe that it's all simply a matter of viewpoint, and what seems abhorrent to one set of people is perfectly acceptable to another. I hesitate to judge other people's actions (not in a graceful, Buddha-like way, but rather in a more shrugs-shoulders-and-gives-no-fucks way) because I looked deep into myself and saw a person just as fucked up as any other human being, capable of the very acts of pettiness and cowardice and foolishness that I was so quick to judge other people for when I was younger and quicker to jump to conclusions.

And suddenly, it's easier to be a bad guy. Or at least, a neutral guy who does bad things. 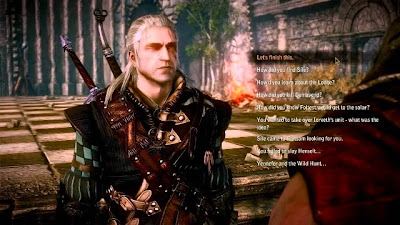 The superb ending to the Witcher 2, where you can choose to fight Letho to the death, or talk about things over a beer. Would I have played it differently today ?

Recently, when playing morally ambiguous games like Shadowrun Returns and Sunless Sea, I find that making gameplay choices that affect the game world in "evil" ways are no longer difficult to make for me. In Shadowrun, I play a consummate professional Shadowrunner - what's important is the contract and the mission. Anything that jeopardizes the mission must be dealt with - no time for moral judgements or thinking about consequences. I regularly refuse to help poor ordinary citizens because I don't want to waste time and resources that distract from the main mission. I go through with the mission even if circumstances emerge where I would previously stop and consider the moral aspects of going through with it. Now it's more important to honour the contract and pick up the payment. Because I don't believe the "good" NPCs anyway - my present world view that everybody is equally fucked up helps immensely in making these in-game decisions.

The way that I make choices in games has changed.

And that is most interesting.

Can role-playing games be a mirror of your soul ?

Does the way I make choices in RPGs tell me at least a little about my attitude to life in general ? Does looking at how I play videogames tell me about what I am capable of in real life ?

Let me quickly iterate here that I only refer to games where there is a moral choice to be made - typically RPGs. I do not refer to games like Call of Duty or GTA which are so often called out as examples of games that influence or cause violent behaviour. That is not a debate I am interested in addressing here.

I am currently a few hours into another playthrough of Baldur's Gate - but this time I'm playing as a true neutral character. So my in-game choices look beyond simple black and white "good vs evils" morals into pretty much "I don't give a fuck about anything other than what is best for me right now "category. I help NPCs if I feel like. I don't if I don't. And I don't lose sleep over what happens to them - because I'm buying into the fiction that they are responsible for their own fates. That's my mind filling in the blanks in the explicit narrative of the game with whatever it likes - the essential fabric of buying into the fiction of a typical RPG world. You invest the world and characters with back-stories and qualities that aren't actually present in the explicit fiction - just so that the world feels more like a real world than like a film set. It's the way we play RPGs, it's why we enjoy them so much.

But what's interesting here is that we can fill in these blanks in whatever way we want. Because what goes on in the gameworld when your back is turned can be whatever you want it to be. Even the most bleak of worlds like Fallout can be imagined to be full of hopes, dreams, aspirations and goodness. Even seemingly prosperous high-fantasy worlds with lush forests and mighty cities can be imagined to be full of perversions, betrayals, pettiness and deceit. And whatever we choose to fill in these blanks with colours our experience of the game.

I don't know about you, but I tend to fill in the narrative blanks with qualities that I perceive in the real world. So earlier on, I used to look at every random filler NPC and assume that they are basically decent, honest, hard working folk. Now, I assume the same NPCs to be greedy, petty, mean and nasty. And this makes them easier to shoot in the kneecaps. Or at least, to refuse to help.

Even more interestingly, it applies only to random NPCs. Not to party members or team-mates. In Shadowrun : Dragonfall, I did a bunch of quests specifically to help out Dietrich, Glory, Eiger and Blitz. I actually got pretty attached to the squad (they're beatifully written charatcters) and was willing to go the extra mile to help them. Which again to some extent mirrors the way I feel about close friends. 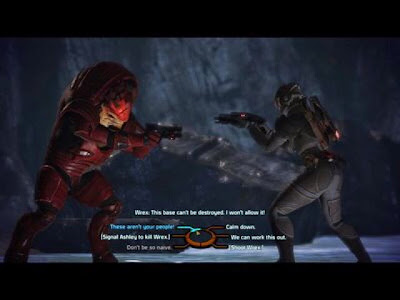 The classic standoff with Urndot Wrex in Mass Effect. I tried my best to reason with him - but to no avail. Today, maybe I wouldn't bother and just shoot him and get on with it. I don't know.

Which makes playing RPGs scary as fuck. Because maybe, just maybe, like really good mirrors, they'll reveal things that I'd rather not see.

Posted by Anand Ramachandran's Evil Twin at 5:31 AM