Spent a couple of hours playing Everlands HD on the tablet. It's a brilliantly addictive little strategy game - with gameplay that is far deeper than its cutesy animal fiction suggests.

Gameplay proceeds by placing pieces on a hexagonal grid and capturing the opponent's pieces. Each piece (animal) has an attack and defense power, and some additional properties like bonuses, initiative and powers. Based on these simple rules, Everlands HD offers an engaging and addictive experience. If you have a droid or iOS device, well worth a try.

Fiction layer
Like most games, the fiction layer in Everlands HD has nothing whatsoever to do with its core game mechanics. If, instead of cute and colorful animals trying to rescue the forest, it featured marines, tanks and aliens in a bleak wasteland, the game would appeal to a completely different audience with absolutely no change in gameplay. Designers sometimes get too caught up in the fiction-gameplay dynamic and end up making games that lack tight focus. My take ? Nail the gameplay and you can always rewrite the fiction.

Winnability
Everlands HD is challenging but fair. You will lose repeatedly but always try again - because the game clearly demonstrates that :

It's a design principle that makes for great games when followed.

P.S. This is the first reasonable length post typed out entirely on my tablet. Typing on the Xoom is pretty neat if you're using a cool little app called Thumb Keyboard. 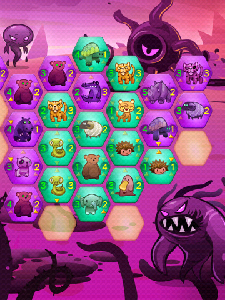 Posted by Anand Ramachandran's Evil Twin at 1:56 AM