Why the Disney-Marvel deal may not be the creative disaster fans believe it is.

by Anand Ramachandran. This article first appeared in The Financial Express 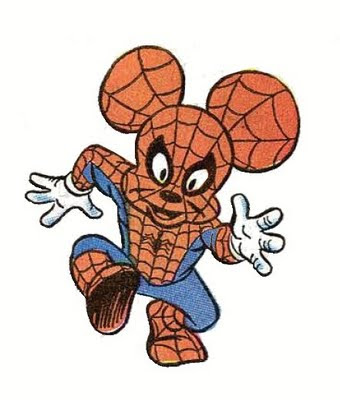 This strangely prophetic image is apparently from 'Amazing Spider-Man' No.5.

The announcement that The Walt Disney company has acquired Marvel Entertainment for a reported 4 billion dollars is perhaps the biggest shake-up the entertainment industry has seen in a long time. This gives Disney access to Marvel's rich library of characters, including huge franchises like Spider-Man, The Hulk and the X-Men, for exploitation across multiple platforms.

Marvel’s chairman and principal stockholder, Ike Perlmutter, keeps his job, and Disney CEO Bob Iger stressed that the current Marvel management team has been doing a great job and would be allowed to continue doing it. Marvel shareholders will receive $30 per share in cash, plus 0.745 Disney shares for every Marvel share they own. Marvel's stock immediately went up 25%, or $9.72, closing at $48.37.


Marvel fanboys reacted with predictable outrage and fear that they would see their beloved bad-boy characters softened up to become 'family-friendly'. Jokes about Wolverine and Minnie Mouse, mashup art featuring characters like Spider-Mouse and Duck America, and raging discussions on the creative implications spread like wildfire on the Internet. You'd think this was the worst thing to happen to comics fans since that awful Joel Schumacher Batman movie.

But there are several reasons to believe that the panic is premature, and perhaps even unwarranted.

Firstly, it's unlikely that Disney will even bother messing about with Marvel's comics line, which is the feeding ground for IP that can be then translated into megabucks-generating film, TV and toy franchises. The comics business is hardly significant in Disney's scheme of things, and there's good reason to believe that they will see sense in keeping the nerdcore fans happy. Time-Warner owns publishing rival DC comics, and doesn't interfere in the editorial content at all.

Satyajit Chetri, comics critic for Rolling Stone India and ardent comic art collector, believes that there's no reason for fans to fret. “Things cannot get any worse than they are right now, at Marvel comics. The best that could happen is some real innovation thanks to involvement of fresh blood, if the Disney stable decides to get hands-on with the Marvel characters. The worst? More editorially mandated crossovers.”, says Chetri.

Secondly, as far as the film franchises (which are Disney's primary area of interest in Marvel) go, they're already pretty much family-friendly summer blockbusters anyway. Even edgier ones such as Daredevil and Punisher were extremely tame when compared to the content of the comics, and Spider-Man, Iron man and Hulk will require almost no major modifications to fit within Disney's creative parameters. Additionally, Disney is honouring all existing contracts that Marvel has, such as the one with rivals SONY pictures for the Spider-Man films, with Activision, Sega and THQ for videogames, and with Universal for theme parks. This puts them in the interesting position, for a few years at least, of generating revenues from their rivals' successes.

In contrast to fans, the response from industry insiders has by and large been positive.

Stan Lee, the original man behind Marvel comics, who remains as chairman emeritus at the company, felt that both entities would benefit immensely from the deal. “I think it's a terrific deal which will be extremely beneficial to both companies. The synergy between them is perfect. Nobody can produce and market franchises better than Disney, and nobody has the extensive library of characters that would make great franchises that Marvel has,” Lee said on comics web site newsarama.com.

Understandably, Marvel editor-in-chief Joe Quesada was quick to reassure fans that all was well and that they had nothing to worry about. “"It feels like Christmas morning, I haven't seen this much excitement in the Marvel halls since... well, ever!” Quesada said on Twitter the morning after the deal was announced. He also had this to say to fans : “"Everybody take a deep breath, all your favorite comics remain unchanged and [Marvel Senior Editor] Tom Brevoort remains grouchy ... this is incredible news and all is well in the Marvel U." Quesada pointed to the relationship between Disney and animation superstar studio Pixar, saying that Marvel would benefit in a similar way.

Many analysts also believe that Disney's financial muscle would create better deals for the work-for-hire creators who work at Marvel, and attract more high-quality talent to the publisher. The deal undoubtedly opens up exciting possibilities in terms of toys and merchandise – an area where Disney surely brings a lot of strengths to the table that Marvel did not have before.

Either way, interesting times are ahead for fans of the Marvel universe. Well-known comics writer Kurt Buseik summed it up when he said “ I do recall, back in the '80s, people at Marvel used to say they wanted to be Disney for older audiences. Well, I guess now they are. What that means, though, remains to be seen."
Posted by Anand Ramachandran's Evil Twin at 4:21 AM