by Anand Ramachandran. This article first appeared on my weekly 'Game Invader' column for the New Indian Express. 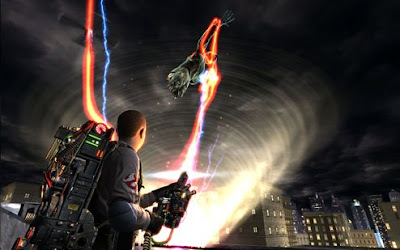 It's been a good month for film franchise based videogame adaptations – Ghostbusters and Wolverine garnering the critical acclaim that normally evades titles based on movies.

While the Wolverine game ended up being way better than the terrible movie it was based on, it was the Ghostbusters game that I was more interested in. The film is a much-loved classic that had a fantastic cast, great humour, and an odd mix of creepy-funny-cool that few films have matched. Living up to that legacy was always going to be hard, especially more than a decade after the film first came out.

But, hoo boy! This game is spades of fun, especially if you, like me, grew up loving everything about Ghostbusters. It's an authentic Ghostbusters experience in every way.

The first Ghostbusters game I ever played was an odd, repetitive and fairly boring one on the ATARI 2600 platform. You'd basically drive around the city, find ghosts haunting random buildings, and then use the famous 'Ghostbusters gun' to trap them. Again and again and again. Even Ray Parker Jr.'s iconic 'tananaananaana – tananananaanaana' humming in the background couldn't dull the pain.

This game is very different. And the music still plays. Yeah, baby.

Within the first two hours of gameplay, you get to trap Slimer (again), learn to use the famous Ghostbusters photon beam gun and other cool equipment, find hidden ghosts, and, most importantly, hang out with Peter, Ray and Egon. Who'da thunk, eh?

From the very first moments, the game makes you feel genuinely like one of the gang. The likenesses of Bill Murray, Dan Ackrod and Harold Ramis are fairly convincing, and the spoken dialogue is flawless. The banter is genuinely funny, and feels just like a Ghostbusters movie.

However, none of this would matter if the actual Ghostbusting wasn't any fun. Luckily, it is heaps. It feels genuinely frantic and tense when you focus the beam on a ghost, and then struggle to reel him in. You can actually feel the spook struggle to break free, and it's hugely satisfying to yank him around and slam him into walls, or the floor. Once you wear the bugger down, you'll have to toss a trap on the floor, and get the ghost right on top of it and hold him there for a few seconds, and you have him. The boss battles, in particular, feel appropriately intense and exciting. The music and sound effects add greatly to the cinematic atmosphere. Awesome stuff.

There are also bit where you need to use the geiger-counter like thingie to detect the presence of paranormal energy, and scan the environment for clues to track down hidden ghosts. One sequence early on, where you traverse a series of flooded, dark corridors in search of a fisherman ghost stands out eerie and spooky, without ever once slipping from action-comedy into pure horror. It's a delicate balance, and it's done very well indeed.

There's also a fun sequence where you fight through hordes of ghosts on the city streets, to blaze your way through to the famous Marshmallow Man, whose gigantic figure looms ahead right through the level. Much entertainment – joyous, happy gaming.

Ghostbusters does have it weak spots – the feedback system could have been better (you often get lost if you haven't been paying attention to the voice-overs), the graphics aren't spectacular, and the shooting sections seem forced. But, as movie adaptations go, this is among the best we've seen. Plus, when you get to run with some of Hollywood's greatest comic actors, who's complaining?

Posted by Anand Ramachandran's Evil Twin at 5:28 AM