Swinging both ways : Swordfighting in games.

By Anand Ramachandran. This article first appeared on my weekly Game Invader column for the New Indian Express.

With the arrival of Mad World on the Wii a few weeks ago, gamers are abuzz with excitement : have we finally got the game with the ultimate sword / weapon based melee fighting mechanics? 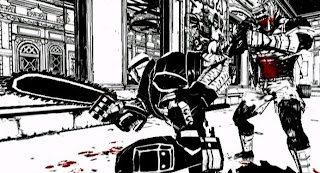 Mad World is the first truly ultra-violent hardcore game to make it big on the Wii platform, and, naturally, has gamers in a tizzy over its use of the Wiimote for bloody, splatterlicious swashbuckling moves using a variety of bladed weapons.

Ever since Nintendo demonstrated the Wiimote and its motion sensor technology many years ago, people all over the world immediately began expecting great sword-based games at long last. Here was the system that would finally make the dreams of several wannabe Errol Flynns, Zorros and Luke Skywalkers come true. They could finally unleash all those twirling, whirling, skilful feints, thrusts and slashes and despatch all manner of evil foes. Much fun was expected.

But what followed was, mostly, disappointing. Zelda's swordplay was a ho-hum part of an otherwise exciting game. No More Heroes featured great sword moves, but was a generally dull game outside of combat. And the great, promised, lightsaber game never came. 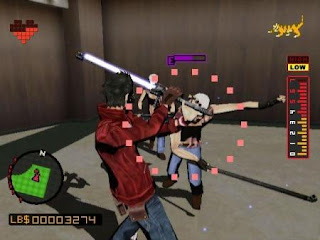 No More Heroes was perhaps the first game to get Wiimote swordfighting right.

The history of sword-control in gaming is in fact varied and interesting. Sword fighting has always been an enjoyable and beloved part of videogames. The earliest ones I remember – such as Barbarian, and Jordan Mechner's original Prince of Persia – offered fantastic fencing fun. But for many years (and even to this day), swordfighting remained a series of button-presses.

And unlike fans of gunplay, who were mostly satisfied with the mouse-keyboard and two-thumbstick combinations that are that genre's norm, the sword fighting fans always clamoured for more. It simply didn't feel right, this abstract button-pressing thing. It didn't help that the bullets brigade also had light-guns when they felt like 'hold-it-in-your-hands' experience.

That's not to say there weren't valiant attempts.

The curious 'Die By The Sword' on the PC platform attempted an early control scheme where the mouse gave the player complete control of the characters sword-arm. It worked decently well in theory, and to be fair, even in practice. However, it ended up disappointing most players because you could repeatedly 'punk' on one or two effective moves and complete the game. The game didn't reward, and on the contrary seemed to punish, players who tried to innovate or experiment with interesting swordplay. 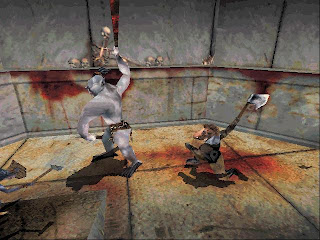 Die by The Sword was an interesting, but only partially successful attempt at a true PC based sword fighting experience.

But perhaps the biggest disappointment of all was the ill-fated Star Wars : Obi Wan, which promised to deliver true lightsaber control, but ended up being a broken, bad game that was roundly condemned by gamers worldwide. They were expecting to wield lightsabers, and were given a sad, 'by the numbers' platform beat-em-up. And, until the advent of the Wii, it was assumed that there never would, indeed never could, be a good simulation of sword fighting in the gaming medium.

After which, it was back to good ole button pressing. The Prince of Persia games. Oblivion. Star Wars : The Force Unleashed. And a host of other solid combat systems that are fun but don't deliver what true fans of swordfighting have been clamouring for for so many years.

Will 'Mad World' open the floodgates for more sword-based experimentation from game developers? Or will it be an aberration, an oddity, after which it will return to business as usual? Much will depend on how well the game does commercially (it's already been received well by critics), and I'm keeping my fingers crossed and my sword-arm ready.

Posted by Anand Ramachandran's Evil Twin at 6:35 AM