Doing a Street Fighter IV review might seem like the easiest thing in the world, but it's not. It's an emotional experience involving nostalgia, writer's block and memories of the ultra-beatdown you got from Seth in the game's “hard” difficulty setting. A review will also not be objective/free from bias, because every gamer/reviewer who is into fighting games is a bona-fide Street Fighter fanboy (yours truly included). So “What is the purpose of this credibility-losing rant?”, you ask? Well, it's simple – Street Fighter IV is probably the greatest fighting game ever made, and easily the most addictive, so addictive in fact, that I'm still air-rehearsing Akuma's Ultra and Super combos while writing this review! 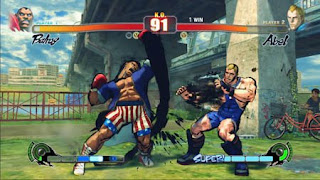 Fighters from Street Fighter IV argue over whether Killzone 2 is better than Halo. 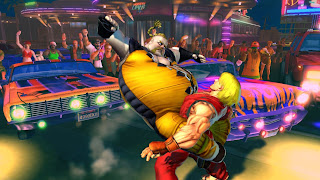 The roster features a varied mix of old faves and interesting new additions.


The roster is really quite varied and fans of the series will be very happy to see their favourites return, and the joy of executing your first 'hadoken' will really give you an unmatched feeling of nostalgia. If you've played any of the older games, you'll feel right at home with Street Fighter IV, particularly if you're playing one of the 'shoto' clones (Ryu, Ken, Akuma, etc. ) because there haven't been any changes to the button combinations of their special moves. The new characters have some very interesting (and powerful) moves, which can take a little practice to execute effectively. Some characters (like Abel, for example) will require a different play-style. So there's enough new content here from the characters alone that will keep you coming back for more. If you're looking to master every single character, quit your job/school/college, stay at home and play Street Fighter IV till you dislocate your wrists.

The arcade version of Street Fighter IV made it's way to Japenese arcades in July last year, and now, some seven months later, we've got a next-gen version on our hands. The home version includes six new characters, online play and promise of downloadable content and an all new “challenge” mode, which will unlock artwork and outfits on the performance of certain tasks. Other than the challenge mode, SF4 also features the usual Arcade mode, which serves the purpose of a story mode, with a prologue and ending cutscene for each character – people who like anime will definitely be able to appreciate these, even if they're a bit dissonant. You'll also need to complete the arcade mode with certain characters to unlock more. There's also a versus mode – this is where you and your friends will spend most of your time. There's also a trial/practice mode which will help you hone your skills. 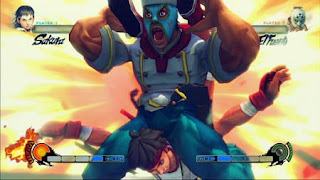 I have no idea who this move is hurting more.


The fighting mechanics in Street Fighter IV have been polished to the point of perfection. Ever since the game's arcade release, Capcom have been hard at work, continuously improving the game after collecting feedback from top players. In fact, an update has already been launched for the PS3 and Xbox360, all within two weeks of the game's release.

SF4's gameplay is reminiscent of Street Fighter III: 3rd Strike and Super Street Fighter II Turbo, making use of six buttons for various degrees of attacks, including three punches and three kicks (light, medium and heavy). Pressing two light attacks (a kick and a punch) and forward or back, initiates a 'throw' move. All characters have unique throws and some can throw mid-air. Pressing the medium kick and punch attacks simultaneously initiates a 'focus attack', which allows you to absorb incoming attacks, while also giving you the opportunity to initiate a counter-attack of your own. Going out all guns blazing is a tactic that will see you lose more matches than winning. The game expects you to read your opponent, predict his moves and then beat him/her with a clever combination of counters, standard attacks, special moves and focus attacks. It also helps that you can taunt your opponents by pressing both heavy attack buttons together (no direct impact on a fight, but it sure will tick him off!). The game also features dashing (which requires successive direction presses either by d-pad or analog stick) and quick recovery (press down as soon as felled). 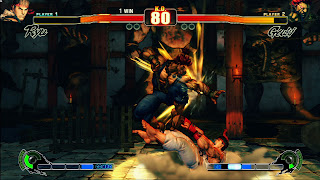 Street Fighter IV is the best fighting game ever.

Super Combo and Ultra Combo gauges are also present in Street Fighter IV, adding more variety to the mix. The Super Combo gauge can be charged by performing regular special moves – it's not required for you to hit your opponent, and merely performing the moves will suffice. The gauge will also fill up if you take damage. The Ultra Combo gauge, on the other hand, will only fill up if you take damage – it fills up a lot faster than the Super Combo gauge when taking hits. Once either (or both) the gauges are fully charged, your character can initiate a Super Combo or an Ultra Combo – you can do this by executing a semi-complex series of directional inputs and button presses (in some cases, all three punches or kicks for Ultras). The Ultra does more damage than the Super, but the catch is that you can use it only when your health meter is in the red-zone. Ultra and Super Combos can often produce comebacks and unexpected results in a bout simply because of the amount of damage they do.

Why is Street Fighter IV the greatest fighting game ever made? It is because Capcom have achieved something that most other developers haven't in a fighting game – they've found the perfect balance between accessibility and challenge. I mean, it's definitely not 'pick-up-controller-and-execute-super-combo' accessible, but by being more forgiving in terms of controller input, it's a lot easier to execute special moves and combos, unlike, say, Street Fighter III: 3rd Strike. It's more about timing in Street Fighter IV, so if you're able to read your opponent's moves and time your attacks to perfection, you're most certainly going to win. The game does cater to a wide variety of players with varying skill levels, so there things which only pro players will use, like cross-ups and focus cancels. 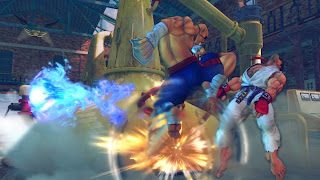 The Pwnzor is Street Fighter IV. The Pwned is all other fighting games. Savvy?

Developers/publishers Capcom have created a fighting game that has surpassed everything that has come before it. Street Fighter IV is easily the greatest game the genre has ever had to offer.
Posted by Anand Ramachandran's Evil Twin at 1:33 AM

Email ThisBlogThis!Share to TwitterShare to FacebookShare to Pinterest
Labels: review