This article first appeared on my weekly 'Game Invader' column for the New Indian Express.

Yeah, I know, the 'narrative versus gameplay' chestnut is a really old argument.

But I found myself thinking about it again, thanks to a typically ignorant review by that pompous snob, Roger Ebert, which reviews Frank Miller's 'The Spirit' with practically no mention of Will Eisner's source material, except for a sarcastic and condescending quip that comes almost as an afterthought.

Ebert called 'The Spirit' a crappy movie, and rightly so. But in choosing to completely ignore the aspects of Miller's self-indulgent stylistic treatment of the material that almost insults Eisner's vision, he demonstrates an alarming ignorance of and disregard for the comics that the film is based on. You're reviewing a comic book movie, and you completely ignore comparisons with the comic book? WTF?

Sadly, if an established and evolved medium like comics, which is actually older than the cinema, can be perceived as irrelevant by Ebert and his ilk, what chance do videogames stand? The venerable Rashid Irani recently reviewed an Uwe Boll Movie, for crying out loud, in the same vein, also managing to slip in something to the tune off “ apparently this game is based on a videogame, and it, like any videogame, is all fluff and no substance.” Hello? 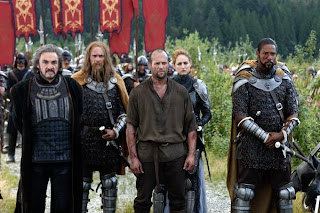 Rashid Irani in the Hindustan Times recently delighted me with a typically uptight, earnest and sincere review of . . er . . . In the Name of the King, Herr Boll's Dungeon Siege based effort. Of course, he just had to take an ill-advised swipe at videgames, having me in splits for about four days.

No substance? Really, Mr.Irani? On what parameters are you evaluating? I'd wager that Tetris or Super Mario Galaxy or Braid or World of Goo have way more 'substance' than much of the tripe that Bollywood (or Hollywood, for that matter) turn out year after year.

The problem is that most of these people compare games to movies or books using parameters that they're comfortable with. They set up the rules, and then claim victory on their terms. Movies are better than games because they have stronger narratives, better stories, more emotional connect.

Er . . that's like saying that Halo is better than Taare Zameen Par because it has a better checkpointing system. Or that Slumdog Millionaire isn't as good as Tetris because it doesn't have any gameplay or level design at all. Ridiculous? Of course. It can't be apples to apples.

Because games need not necessarily be about narrative at all. Sure, there are many games which intend to tell stories, and many that do it extremely well. Grim Fandango, Indigo Prophecy, Knights of The Old Republic, Bioshock and their ilk told stories that would sit shoulder-to-shoulder with the best narratives in any medium, and were better games for it.

But to suggest that every game needs a story, and to cite lack of story as a weakness of gaming as a medium, is absurd. They're called games for a reason – because you're meant to play them. If it wasn't about playing, they'd be interactive movies, and we all know what happened to that dumb idea.

Would Tetris or Bejewelled be better games if they were presented in the context of some silly story about saving the universe? Did the wafer-thin stories of Serious Sam or Doom make them any less fun? Do you really need a narrative context when causing a spectacular pile-up in Burnout? No, no and no. They're fun to play, and being games, that's really the bottom line. If you don't understand gameplay, you aren't equipped to criticize the form. Period.

Legendary designer and creator of Mario, Shigeru Miyamoto once said, “At Nintendo, we don't believe that games should be like movies at all. We try and make games that people can enjoy in the proper way, as games.” There's a reason that Nintendo sells more games than any other company. Because they get it.

Posted by Anand Ramachandran's Evil Twin at 12:41 AM