Fallout 3 is not just Oblivion with Guns.

Since Bethesda Softworks announced that they would be picking up and reviving Interplay's revered Fallout franchise, I've been hearing the term 'Oblivion with Guns'. And, now that Fallout 3 has been finally released to great critical and commercial success, I hear the term bandied about even more.

This is not only unfair to both games, it's fairly ignorant, and I believe that anyone who uses these words to describe Fallout 3 doesn't understand either game's true nature. 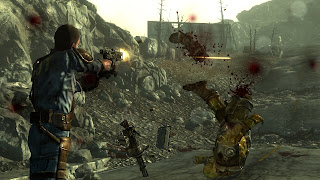 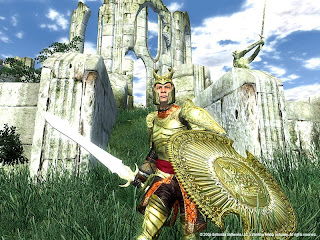 Fallout 3 and Oblivion are only similar to the extent that they share the same engine, but are very different experiences from a role-playing and combat perspective.

Of course there are similarities – both games share the same engine, and hence are bound to feel similar at a surface level. The way people move and talk, the on-screen compass, and some terrain features feel similar, natural for games that run on the same technology. But nobody ever says Left 4 Dead is “Half Life 2 with Zombies”, do they?

Nothing is more significant than the fact that both games are based on completely different role-playing systems. While Oblivion uses Bethesda's famous Elder Scrolls system where your character develops and improves skills simply by practicing them, Fallout's more traditional system forces you to manually distribute skill points to determine your character progression. The difference this makes to the role-playing aspect of the gameplay is profound.

If you want to be a good swordsman in Oblivion, you'll have to actually fight with the sword all the time, and eventually you'll get better at it. Fallout is just the opposite – you decide that you want to be a small guns specialist, put points into that skill, choose the and you'll be pwning headshots at those creepy super-mutants instantly. The sense of choice and character development is so dramatically different that I cannot believe how anyone who has played both games extensively can fail to recognize it.

The good / evil scale and how the game responds to your choices are also significantly different. Oblivion maintains a separate relationship level with each individual in the game, which is a complex calculation influenced by a range of factors such as your relationship with the individual, your alignment, race, guild memberships and the like. Fallout sticks with its far simpler 'Karma' system, which is again a rather simplistic angel-to-devil incarnate scale, which reflects a sum total of your good and evil deeds. And your Karma determines how characters of good and evil alignment respond to you. That's it.

Both systems have their appeal, undoubtedly. Oblivion's system is, in my opinion, more organic and complex, offering a better fleshed out role-playing experience with more evolved politics, economics and interpersonal relationships. The multiple races, more varied environments, numerous interesting guilds, and the spellcasting system make Oblivion the more epic in scope of the two.

Fallout, on the other hand, appeals to the traditionalist in me, giving me the number-crunching, stats-heavy, strategic approach to character development and combat that I love so much in my RPGs. It's a tighter, more detailed game than Oblivion, and offers the more interesting of the worlds to explore, thanks to the ability to reference pop culture and pack in familiar elements. It's genuinely funny as well, never taking itself too seriously, and the characters, story and setting are all superior to those of Oblivion.

So there you have it – these are two fantastic games that share some similarities, but have differences so fundamental that they would be obvious to any serious RPG player. Try calling Oblivion 'Fallout 3 with Swords', and see how ridiculous it sounds. So why should the other way round be any less stupid?

Posted by Anand Ramachandran's Evil Twin at 2:52 AM