(this article appeared originally in my 'Game Invader' Column for the New Indian Express.)

For me, it began with Indiana Jones.

More specifically, the videogame 'Raiders of the Lost Ark' for the venerable ATARI 2600 system which was the first game I played which featured an inventory, multiple screens, and characters you could interact with (all standard features in modern adventure games, but this was 1982 ! )

For someone who cut his gamer teeth on single-screen worlds of Defender, Pac-Man and Space Invaders, this was a new proposition altogether. There were several different screens - a market, and caves, and a temple, and a mesa field! You could buy treasure maps and guns from sinister sheikhs! A pickpocket would steal your stuff if you weren't careful. There was a raving lunatic in the marketplace. My mind reeled, and we played it to death. 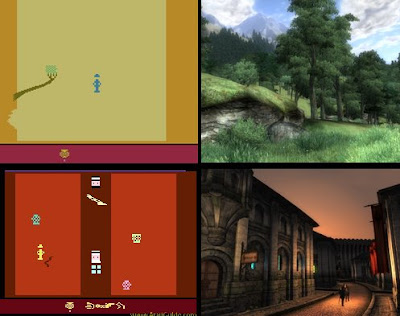 Exploring trees, caves and marketplaces was as exciting in Raiders of The Lost Ark twenty years ago as it is in Oblivion today. Believe me, in twenty years, Oblivion screenshots will look just as ridiculous.

Today, I understand why 'Raiders of the Lost Ark' was so exciting to me – I'm the kind of gamer who enjoys the exploration of worlds. I, like millions of other gamers, am happiest when travelling vast, expansive fantasy lands, meeting interesting characters, battling mythical beasts and being in a great story. 'Raiders' was the first game to give me a taste of the reasons I would list Baldur's Gate 2, and Fallout among my all-time favourites.

The amazing following enjoyed by games like the Grand Theft Auto series and the role-playing genre in general is largely due to this sort of appeal. Wandering through a free-roaming virtual city performing interesting, or even incredible feats offers a vicarious pleasure that connects with the very basic sense of wonder and adventure present in all of us.

Whole genres of gaming such as adventure and role-playing are founded on this very basic appeal. Action games such as Halo and Half-Life have also benefited greatly by creating richly detailed universes with great stories to embellish their top-notch gameplay. Even gamers whose chief pleasure is blowing things to smithereens seem to enjoy doing it in environments that they can explore as well!

In any modern role-playing game, in addition to adventuring and participating in thrilling battles, players also have to indulge in seemingly mundane activities such as shopping, repairing their worn-out equipment, eating, drinking, gossiping and finding places to rest. Far from boring us to death, these features actually add to the sense of immersion in the gameworld.

Richly detailed gaming environments fuel this sense of discovery. The exploratory gameplay involved in checking out every nook and corner of the gameworld for hidden surprises and delightful . . er . . ah . . . delights is used extensively by games like GTA and the Zelda series to draw gamers in further, engrossing them for several additional hours. There isn't a gamer who has played these titles who hasn't been rewarded with some precious bauble for taking the trouble to peek behind a rock, or explore an inocuous looking back alley.

Interestingly, virtual gameworlds seem to delight us in equal measure when they offer us settings far removed from reality (Oblivion, Mass Effect), or closely resembling it (GTA). While getting to know a virtual universe, it seems to matter little whether it's science fiction (Star Wars) , fantasy (Dungeons and Dragons), or close to reality (GTA again) – we love playing about in them all. We also seem to equally enjoy saving worlds, or exploiting them for fun and profit. As long as they're fun to discover, the game developers are getting our money.

Thanks to videogames, we don't have to be Indiana Jones to travel to exotic worlds and kick ass.

Posted by Anand Ramachandran's Evil Twin at 8:02 AM