This article first appeared in my column for Zeitgeist, the New Indian Express' Saturday supplement in Chennai. They don't seem to have uploaded it to their site, so I've taken the liberty

Two games I've played in the past week are notable for being among the best looking games I've ever played. They're Assassin's Creed , and Colin McRae : DIRT – both titles have managed to drop my jaw.

I happen to be one of the loudest voices in the 'gameplay over graphics' camp, and I still stand by that credo. However, it's nice once in a while when a game (or two) comes along that simply blows you away by simpy being stunning.

DIRT is far and away the best looking racer I've played. Period. The car models, tracks and environments simply bristle with life and detail – grass rustles, dirt and gravel fly off the track, debris scatters and remains on the track as you make another pass. The damage to your car is also spectacular – dirt and grime, scratches and dents, and cracks on your windscreen all show up to realistically reflect the wear and tear that would be obvious on any car driven as badly as my Chevrolet SUV in DIRT. In fact, I normally prefer racing from a completely first-person view, but DIRT has me switching to third person so I could fully take in the graphic splendour this game delivers. 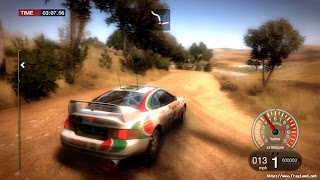 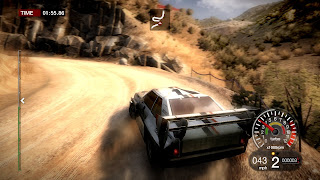 Who says dirt is ugly? A poke in the eye!

The DIRT menu screens are the most pleasing in recent memory – it's a delight to simply browse through the splendidly designed menus that take you through the game's tutorials and various game modes. Top notch. Deserving of a 'best UI graphics' awards – in fact, they should institute a category just so that DIRT could win!

Assassin's Creed needs no introduction to gamers, but I can't help stating how brilliant the game looks. The level of detail present in the gameworld is unprecedented – no other game has felt so alive. While other fantastically detailed worlds exist (Oblivion, Mass Effect), Assassin's Creed surpasses those in terms of sheer believability. Walking through the crowded streets of the game's locations, you truly get a sense of moving among living, breathing people. The excellent sound design and voice work augment this, but it is unquestionably the visuals that deliver the knockout punch. 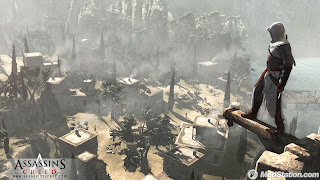 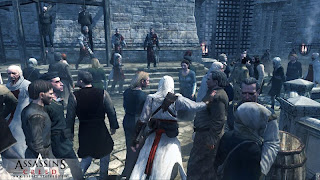 Altair effortlessly moves through the crowd, like Karamchand in that classic opening sequence.

Altair's cloak billows in the wind as he free-runs through the treacherous, dizzying levels like some sort of medieval spider-man. The animations are fluid and flawless, the textures meticulously crafted and the colours muted and believable. A pleasure to play, and a treat to watch.

Of course, it helps that both games are fun to play. If they weren't, I wouldn't have lasted long enough to take in all the breathtaking eye candy they pack within. Still, it would be pretentious to assume that the graphic excellence in these titles is in any way subservient to the gameplay – they stand tall as examples of games which would have been less fun if they didn't look as good as they do. A case of graphics greatly enhancing gameplay.

It's also important to note here that DIRT and Assassin's Creed are not 'Crysis' gorgeous – they don't depend purely on technical strengths to strut their stuff. I ran DIRT on the humble XBOX 360, and Assassin's Creed on a laptop running a GeForce 8400 GS, a decent card, but not a monster by any means. Crysis wouldn't even run on these configurations, let alone look pretty. It's important, in my book, to deliver good visuals on medium range systems, and certainly on next gen consoles. (While on that topic, take a bow, Valve, for your source engine)

Games like these are poster children for the 'next-gen' gaming experience – games that make it easy to believe that total immersion is eventually possible, and that one day we won't be able to distinguish virtual worlds from real ones.

Posted by Anand Ramachandran's Evil Twin at 6:40 AM