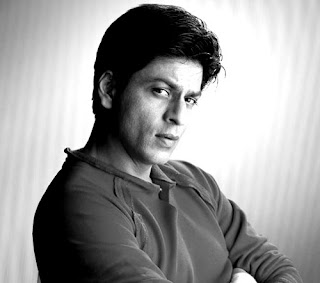 Ever since I came to Mumbai to work on a number of projects involving his company, there's been no escape. Open the morning paper, and he's staring at you. Flip the TV on - you can't surf channels for more than five minutes without looking at his mug. Take a walk, and he's observing you from various billboards at every turn, almost as if to say "Taking a walk, eh? Just thought you'd goof off from working on my stuff for a bit, eh?", with his trademark wit and sarcasm.

And hence the following ode. You are welcome to set it to a rap tune. Or hard rock. Or villu-p- paatu if you prefer.

He stares at you from the TV screen

From every damn ad that you've ever seen

Selling you phones and cars and stuff

He's on all the billboards and posters and signs

How can I escape? Lock myself in the loo?

I won't be surprised to find him in there, too!

How do I escape from Shah Rukh Khan?

Any more of him and I can't go on.

Just get me away from Shah Rukh Khan.

His hamming and preening just drive me insane

You'll see him on some TV channel quiz.

Flip through the channels and guess what ? Gee, Whiz!

He's singing and dancing and smiling at you

On every frickin channel up to 122.

How do I escape from Shah Rukh Khan?

Any more of him and I can't go on.

Give me anyone else – yes, even Salman!

But please do something about Shah Rukh Khan.